Bongbong's Big Lie and the Big Truth of EDSA 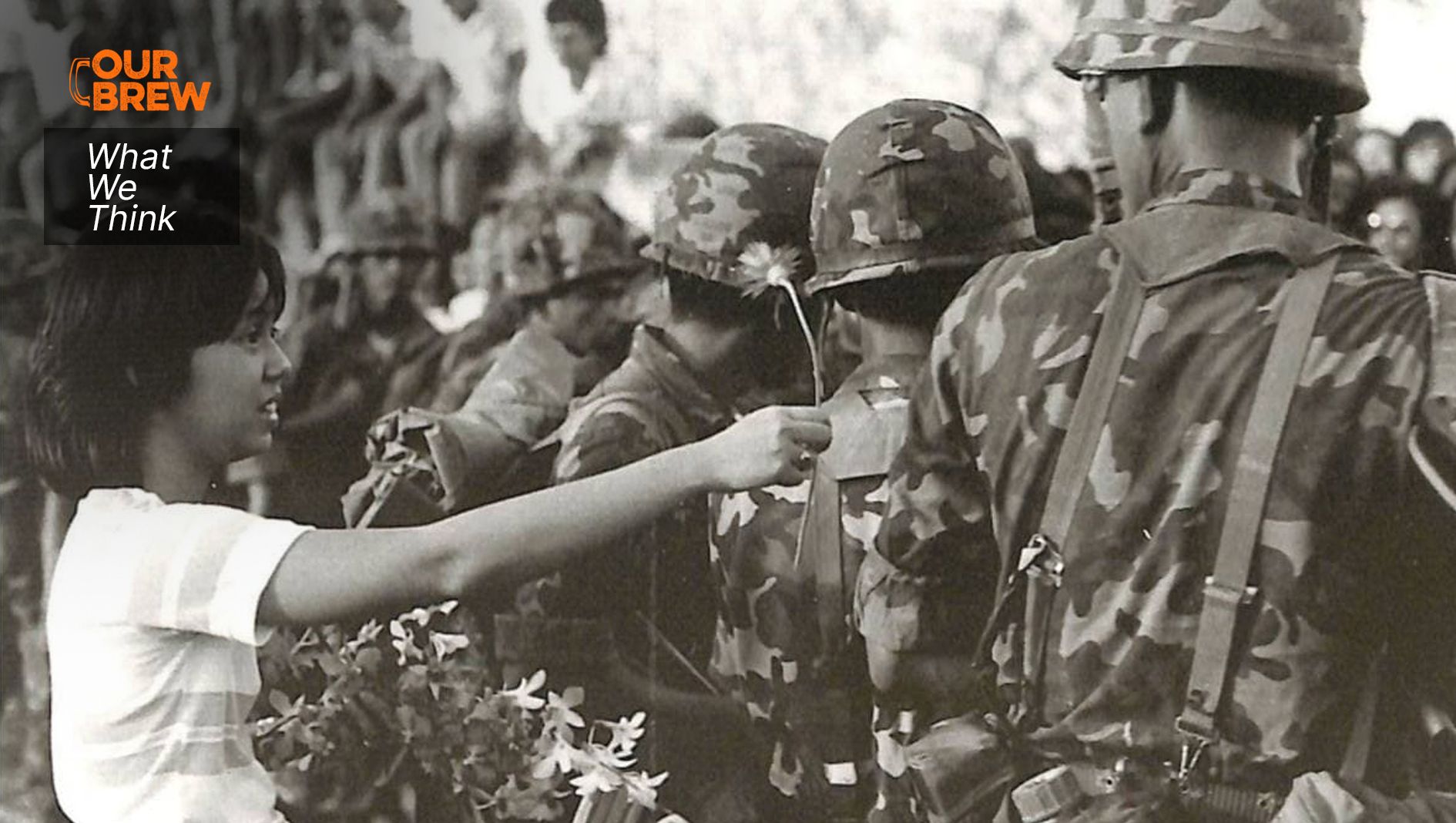 When Ferdinand Marcos ran for president, his slogan was “This nation can be great again.” (Oh, yes. Long before Donald Trump’s MAGA.) Ten years into his dictatorship, we were the “Sick man of Asia.”

Marcos borrowed billions of dollars from the World Bank and International Monetary Fund, and systematically plundered them. When those banks found out about his corruption, they stopped lending to the Philippines. Then we suffered the worst economic recession ever in our country’s history — for two consecutive years!

We were like George Foreman taking a one-two punch from Muhammad Ali.

Turned out Marcos had addicted our economy to those foreign loans. Hundreds of thousands lost their jobs.. Millions fell below the poverty line. Government went bankrupt. The people became restless. Juan Ponce Enrile and Fidel V. Ramos started a revolt with guns and grit. The people joined them with flowers and rosary beads, and transformed their revolt into a revolution.

That is the Big Truth of the EDSA Revolution.

The people were suffering so much that Marcos’ own Minister of Defense and Chief of Constabulary started the revolution that toppled his dictatorship. But the Big Truth does not stop there. Those loans that Marcos borrowed, he borrowed in our name. We the people were his collateral. We were the ones who paid them. We are still paying them.

It’s as if Marcos used our credit card and maxed it out. Then he faked our income statement to raise our credit limit, and maxed it out again. Our debt got so big and our economy so small we could only pay what credit card companies call “minimum amount due.” And like credit card debt, which passes on to their co-signer when the borrower passes, foreign debt is passed on to the next generation. And the next, and the next, until one generation finds the will and the wisdom to dig our country out of it.

We Boomers know that, some GenXers too. But Millennials and GenZies don’t, and they are the largest voting bloc in this year’s presidential election (52% of registered voters, according to Comelec). They are also the social media generations and Bongbong’s cyber troops have been working on them for years. Telling them that this nation was really great in his father’s time, and he will bring back those times: Babangon muli.

That is Bongbong’s Big Lie.

The Big Lie is a propaganda technique of telling a lie so big you can’t believe anyone could tell a lie that big — so you believe it. It was devised by Adolf Hitler himself. Judging by Pulse Asia’s January survey, more than half of registered voters believe Bongbong’s Big Lie.

One, we did not teach our children well. We did not write the Marcos Dictatorship — and the EDSA Revolution, which took it down — into their textbooks and their schools’ curricula. So their minds were a blank slate for Bongbong’s cyber troops to write lies and falsehoods on.

We’ve got to be the dumbest people in the world. History is supposed to be written by the victors. We won the EDSA Revolution and didn’t do that, for crying out loud! If Marcos wins this election, it’s his lies and falsehoods that will be written in your children’s textbooks!

Two, we have fixated on Marcos’ human rights abuses instead of his industrial scale plunder of our country. I say that not to diminish those abuses; I had my share of beatings in one of Marcos’ stockades for prisoners of conscience. But as Rodrigo Duterte’s approval ratings so sadly attest, Filipino voters don’t care about those abuses as long as they are not committed against them.

Whereas the billions of dollars Marcos borrowed in our name and then plundered are being paid by each and everyone of us — from the dying to the yet unborn.

Three, we have not recovered the Marcos loot. It’s estimated at $10 Billion, at least, and we have only recovered $3.5 Billion. That leaves Bongbong Marcos a massive war chest for keeping his Big Lie afloat.

An ocean of our own lard, as it were, to fry us in.

And fry us, Bongbong Marcos did. Since he ran for senator in 2010, Marcos has been revising the history of his parents’ conjugal kleptocracy. He jumped the starting gun of this presidential race by more than a decade. Now he leads this race by the proverbial mile. Isko Moreno, Ping Lacson, Manny Pacquiao and Leni Robredo are running for second place.

There is no silver medal in a presidential race.

All he’s got is a big bubble of BS that can be pricked by the Big Truth of the EDSA Revolution — that Marcos borrowed billions of dollars in our name then plundered them, and turned our country into the “Sick man of Asia.”

That’s why next Friday, February 25, Isko, Ping, Manny and Leni should celebrate the EDSA Revolution in a big way. In their own way, but in a very big way: marches, motorcades, rallies, symposiums, rekoreda, everything including the kitchen sink.

But their celebrations should have a common theme, and I suggest it be: Marcos vs Philippines. Not vs Moreno, vs Lacson, vs Pacquiao, or vs Robredo.

They should have a common message, and I suggest it be the Big Truth of EDSA: Marcos borrowed billions of dollars in our name then plundered them, and turned our country into the ‘Sick man of Asia.’

It should be their mantra: Marcos borrowed billions of dollars in our name then plundered them, and turned our country into the ‘Sick man of Asia.’

Their celebrations should not be political, as in to win votes; they should be societal, as in to do good for our country. Because Marcos borrowed billions of dollars in our name then plundered them, and turned our country into the ‘Sick man of Asia.’