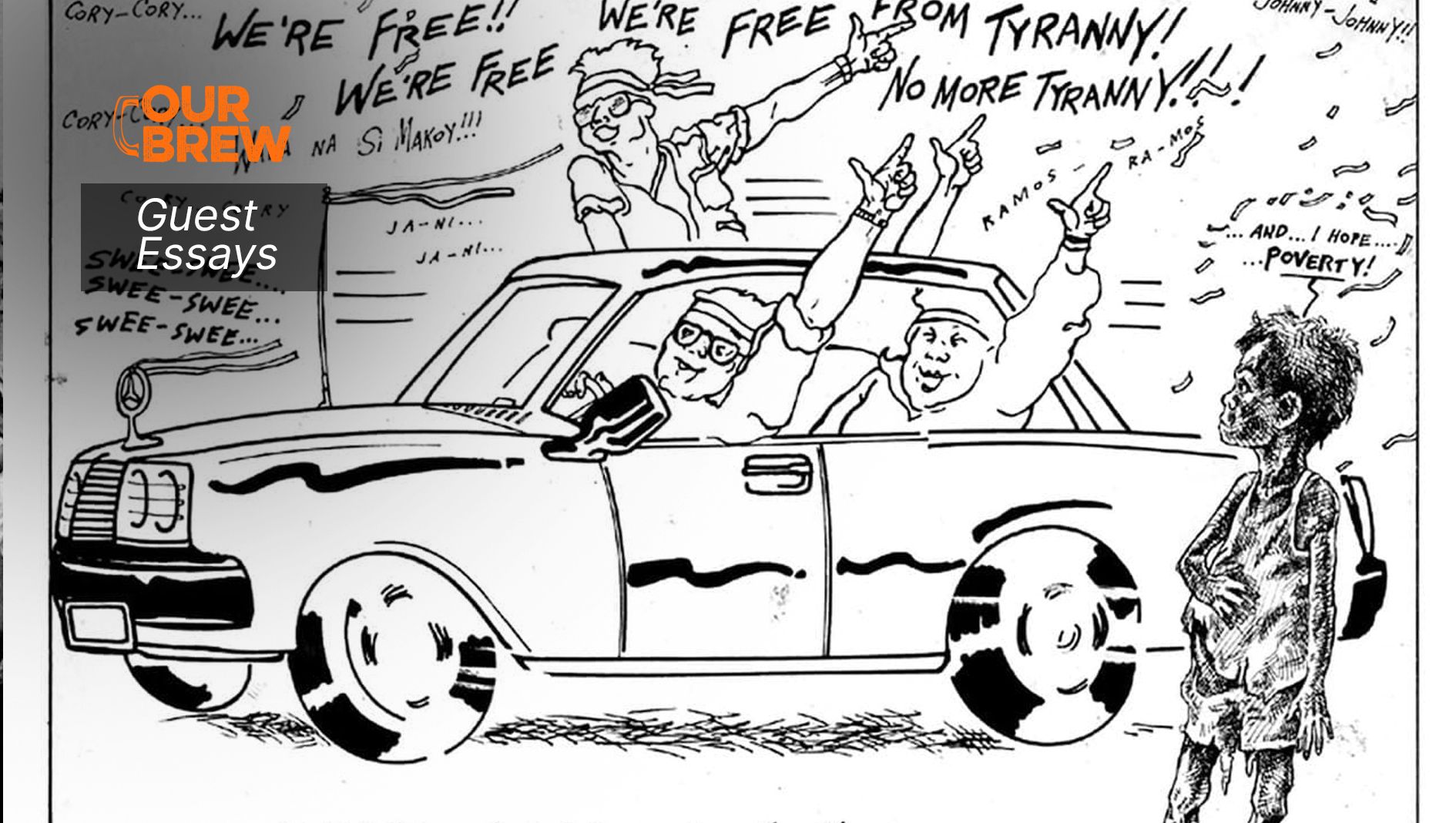 The Philippines in 1986 was not entirely different from what it is today. The year 2022 feels like a noisier, Hi-Def re-make, upgraded by the Internet, FB, DigiTarps and most of all, selfies.

People were getting harassed and arrested. One of our orgmates, printmaker, painter, and founding member of ABAY Manny Gutierrez, was forcibly taken from
his domicile and, the next he was seen, was in a garbage dumpsite, salvaged (murdered). It was difficult then dahil maraming bawal at may wiretapping at surveillance sa lahat sa Metro Manila, although manu-mano and not as systematic as we have today with CCTV at every traffic stop.

Talking about Feb. 22 to Feb. 25, 1986 : I was working as an Editorial Cartoonist for The Manila Times, which was revived in time for the February 7, 1986 snap elections. Entering this publication felt both exciting and frightening because for the last 20 years, Marcos did not hold elections he did not control. He had done this in 1965, 1969, and 1981 so there was slight optimism but it could also be dangerous, realizing that we could be shut down and jailed at any time, again.

We never went to work free of anxiety but we had to do it, and it was the time to do it.

It was in our makeshift offices at Scout Santiago, Quezon City near Roces Avenue where we found out through Radio Veritas, reporters on the ground, and initial teletype services that Juan Ponce Enrile and Fidel Ramos decided to mount a putsch against Marcos and Cory Aquino was kept safe somewhere in a convent in Cebu.

We received news via radio and telephone calls. It was through the radio that we learned about the call from Cardinal Sin for the faithful to head outside Camp Aguinaldo and Camp Crame and surround and protect Enrile, Ramos and his RAM soldiers from being massacred by Marcos and Ver. The tank brigade did not attack the people. Two days later, even the attack helicopters sent by Marcos to bomb Camp Crame and disperse the crowds defected.

I share editorials and artworks done while reflecting on the fact that Marcos did not want to accept defeat from the earlier snap election. His self-proclaimed presidency lasted until the the day he fled so when he escaped the crowds at Malacañang, there was genuine celebration.

EDSA set into motion other things no one expected 36 years later.

Some of the activists of EDSA have even become apologists for this government.

There were two great lessons that were impressed upon 30 year old me: first is that change does not happen overnight and so you have to be patient. And next was be consistent with your life. We look at things before, during, and 36 years later there are still so many things to work at.

Interesting to note the insiduous pattern of elite politics : Lt. Gen Fidel Ramos, then one stimulant of EDSA 1 turned his back on his cousin, Ferdinand Marcos, Sr. and caused him to leave. Six years later, when Ramos became president, he allowed Marcos’ widow and children to return to the Philippines from Hawaii. Politics is different for those in power as against the ordinary masses of the Filipinos.