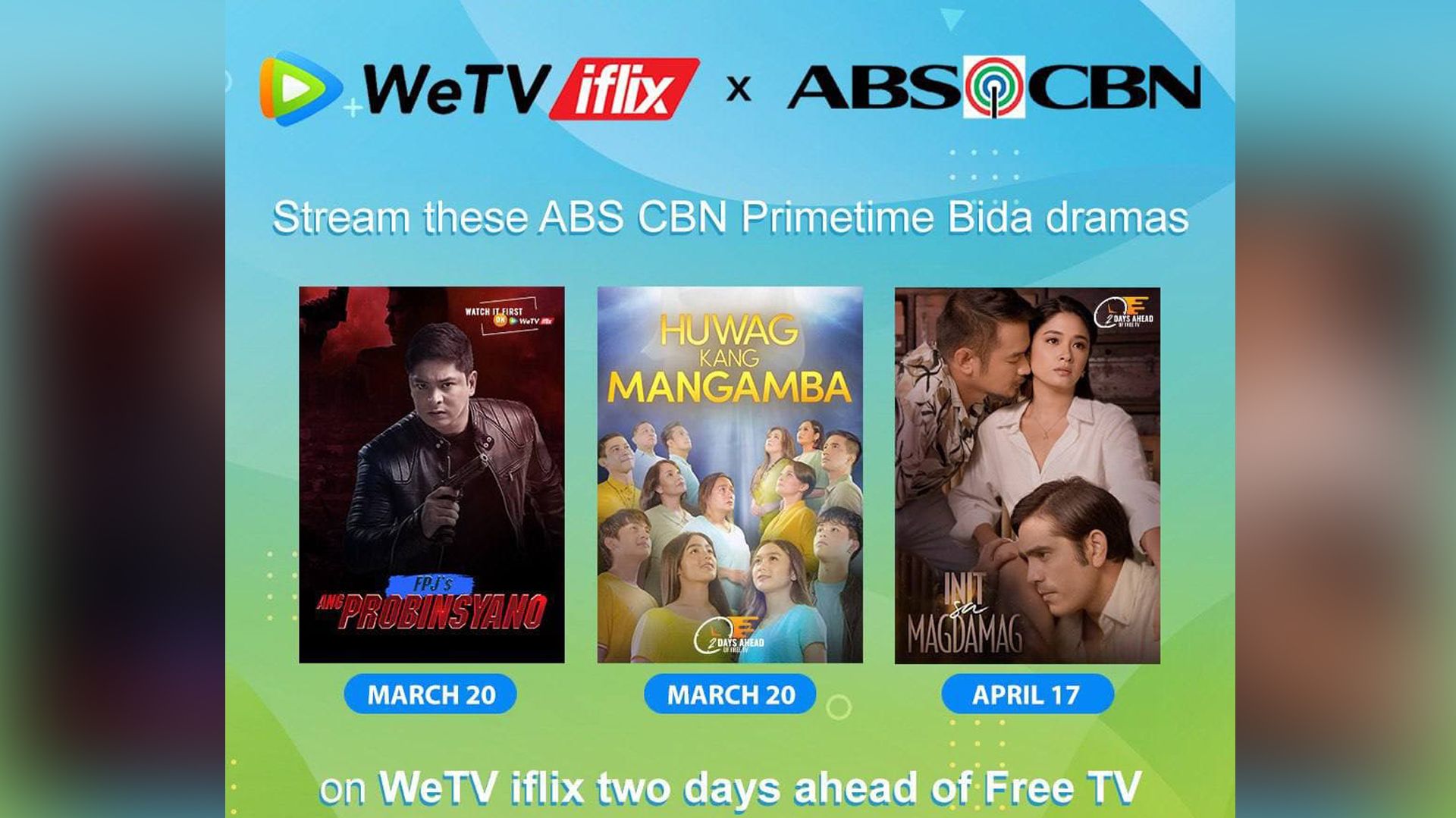 The multi-year deal will have Primetime Bida series premiere on the streamer before local broadcast.

There can only be exciting things in store when the streaming service that delivers the best in Asian and local premium content joins forces with the biggest entertainment provider in the country to bring the best of its shows to a wider audience. WeTV iflix recently announced its multi-year partnership with ABS CBN Entertainment, where its Primetime Bida series will be available to stream on the platform before it airs on TV.

The first salvo of shows in this game-changing partnership includes the long-running fan favorite FPJ’s Ang Probinsyano, and two new dramas Huwag Kang Mangamba and Init Sa Magdamag. In keeping with ABS CBN’s legacy of compelling stories coupled with powerful performances, these three shows are certain to appeal to Filipino fans. WeTV and iflix users will be able to stream these series up to two days before they air on local TV.

Leading the pack is the highly popular FPJ’s Ang Probinsyano topbilled by Coco Martin, which is now on its 6th year and is one of the longest-running ABS CBN teleseryes. Viewers continue to stay engaged with the story of Cardo Dalisay as he stands for what is true and just to protect his family and community. Now fans can get ahead and catch the show FIRST as it premieres on WeTV and iflix VIP 50 hours before it airs on local TV, and ahead of any other platform.

For those looking for an uplifting story during these challenging times, the new inspiring series Huwag Kang Mangamba is most timely. The show’s cast is led by love teams Andrea Brillantes and Seth.

Fedelin, Francine Diaz and Kyle Echarri, also known as the Gold Squad, joined by a strong support cast including Sylvia Sanchez, Eula Valdes, Diether Ocampo and Enchong Dee, among others. Set in the fictional town of Hermoso, the story revolves around two girls who die in separate incidents but are miraculously brought back to life. This second lease on life leads to more miracles, and becomes a catalyst for a spiritual revival through the town as they rebuild the old church.  Fans can catch this brand new series FIRST as it premieres on WeTV and iflix VIP 46 hours before it airs on local TV.

Both FPJ’s Ang Probinsyano and Huwag Kang Mangamba will also be available as catch-upfor FREE on WeTV and iflix two to three hours after local broadcast.

Just in time for summer, the sizzling new ABS CBN Primetime Bida series Init Sa Magdamag premieres on WeTV and iflix VIP on April 17, 46 hours before local broadcast on cable and free TV. Gerald Anderson, JM De Guzman and Yam Concepcion are the major players in a love triangle that is marked not only by love, but by passion, betrayal and a sense of family. Catch-up on this sexy new drama for FREE on WeTV and iflix two to three hours after the show airs.

The partnership with ABS CBN Entertainment is part of WeTV and iflix’s major content push for 2021, delivering topnotch content to its users ahead of other platforms. “One of our main goals for this year has been to give our users the power of choice when it comes to their entertainment, especially now that we are spending more time at home. Bringing excellent local content and compelling stories to you first is a big step in that direction, and we are excited to have ABS CBN as our partner in this endeavor,” says WeTV and iflix Country Manager for the Philippines, Georgette Tengco. “We look forward to delivering more of the Primetime Bida shows in the years ahead, so do watch out for that.”