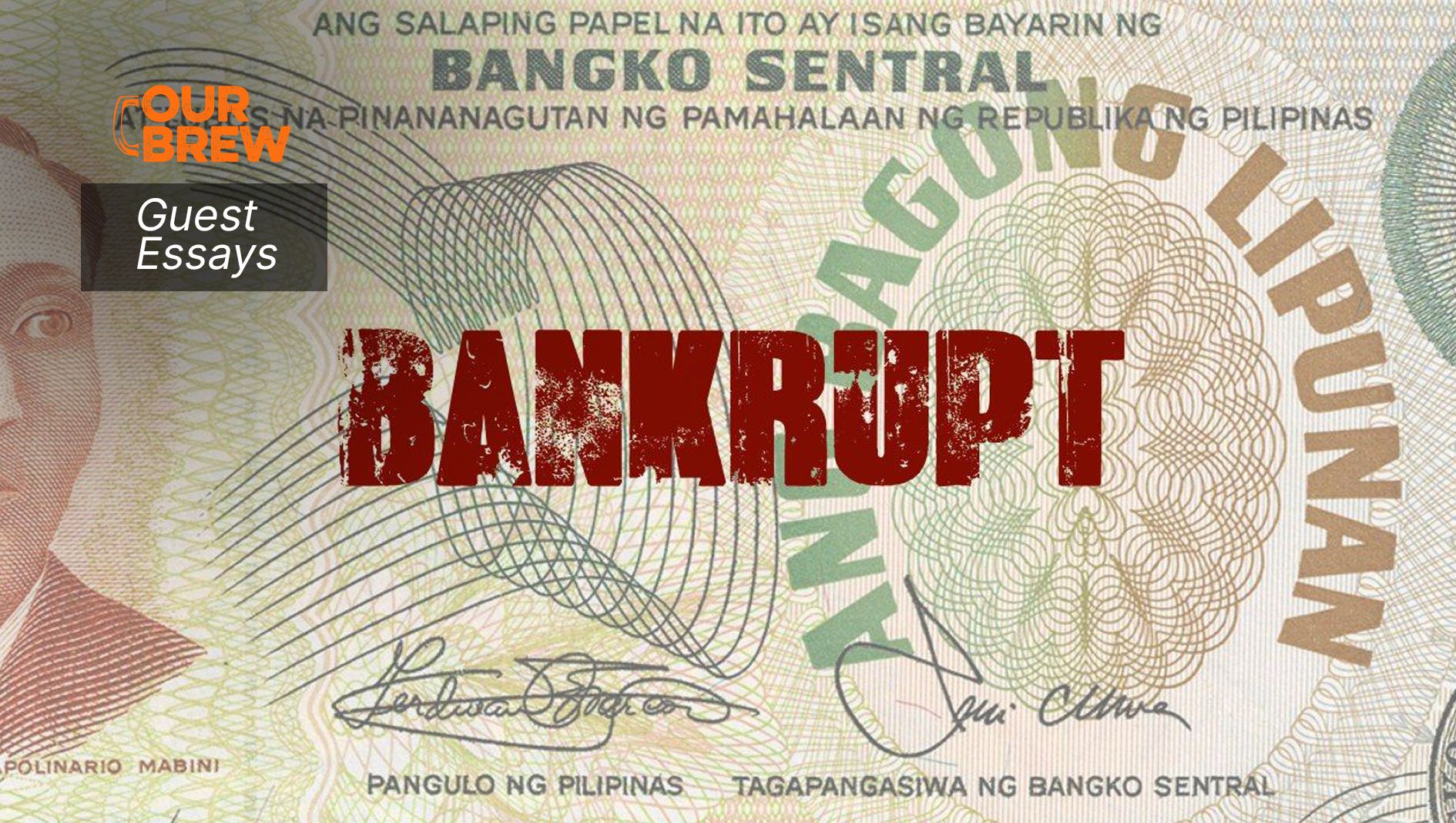 Can a country’s president bankrupt its Central Bank? Ferdinand Marcos did that in 1983, and today, generations of taxpayers not yet born during Marcos’s time are still paying for those bad loans the Marcos regime took out and wasted.

I remember those bad old days. I was with PNOC at that time and Saudi Aramco wouldn’t load any crude oil to our very large crude carrier (VLCC) parked at their Ras Tanura port unless we paid in advance. We used to get 60 days of credit.

I was privileged to join a mission to negotiate oil supplies around the same time. We used our company Learjet because it would facilitate our movement from one oil producing country to another. Besides, the aircraft was due for maintenance in Germany and was flying in that direction.

Our pilots carried several duffel bags full of dollar bills to pay for refueling our aircraft and other needed services. Our usual credit card was no longer honored.

They were not taking chances with us. The whole world knew Marcos drove the Philippines to the rocks. There was not enough foreign exchange at the Central Bank to pay for imports, including essential medicines.

Those were the days after Ninoy Aquino was killed by the regime. The country’s political situation was volatile. Business confidence was down. There was capital flight, further exacerbating our precarious foreign exchange situation.

Then prime minister Cesar Virata was worried enough to take former Central Bank governor Jaime Laya and Cesar Buenaventura, the private sector representative to the Monetary Board, to New York to talk to our bankers.

Little did they know that the situation was worse than they imagined. As soon as they sat down with the head of the lead bank managing our account, they were told that the Philippine foreign exchange reserves were overstated by $600 million.

“We were caught with our pants down,” Buenaventura told me in an interview last Saturday. The banker told them there was nothing to talk about until they got their financial statements in order.

Buenaventura said they knew they had problems, but they were shocked to hear how bad the country’s situation was. Neither Virata, who was also the finance secretary, nor Laya who was CB governor, had any inkling.

The first order of business was to avert a debt default.

So they rushed back to Manila to verify the information they were given. They got SGV to go through the numbers, and sure enough they were told the $600 million overstatement was true.

The country was broke. It was caused by a combination of factors constituting a perfect storm. The Marcos cronies couldn’t pay PNB, DBP, GSIS, giving rise to a crisis among the three GFIs. Also adversely affected were crony banks: Traders Royal and UCPB.

Principal exports like sugar and copra were suffering price declines. In the meantime, prices for essential imports like oil were rising fast. Capital flight worsened after the assasination of Ninoy. In short, we had a forex crisis.

It was also found that PNB branches moved money to branches in another time zone with the same going back before banking hours opened in the sending branch. It gave the impression we had more dollars than we really did.

The economic managers had to face the reality of having no more dollars in the Central Bank to pay the banks or to pay for basic imported necessities like oil. Virata knew they had no choice but to request for a debt payment moratorium for about $20 billion in outstanding debt to some 300 banks.

CESAR VIRATA, then finance secretary, had no inkling: The country was broke.

But the banks did not even want to talk to a Marcos government official. Virata knew they needed a new CB governor with enough international gravitas. They turned to Jobo Fernandez.

It took a while to convince the veteran banker to take the job. When he finally agreed, he sat down with Virata and company to assess the situation. At the end of it, Buenaventura said Fernandez remarked: “Gentlemen… the way this looks it seems we are just shuffling deck chairs on board the Titanic.”

The sudden collapse of confidence from international financial institutions made it difficult for the Philippine government to get debt relief, much less to borrow. Both were needed to cut the increasing budget deficit.

The government had to impose import controls and implemented foreign exchange rationing.

Forex access was primarily for the purchase of crude oil and petroleum products. All others had to get their own forex from the black market.

To make sure the Central Bank had enough forex to pay for crude oil, then trade and industry secretary Roberto Ongpin tapped the Binondo Central Bank. Ongpin met weekly with five or six of the top Binondo blackmarket traders of forex and decreed that they supply so much forex weekly at a set price.

The dollar bills were packed, flown by private plane to Hong Kong, and deposited presumably in the Central Bank account at PNB Hong Kong. That simulates forex coming into the system to at least cover oil purchases. The country was on a hand-to-mouth existence for its forex requirements.

The Central Bank also created a fund to guarantee payment of airline tickets at guaranteed rates. The airlines refused to accept the unstable peso for payment.

To address the threat of runaway inflation, the Central Bank introduced the so-called Jobo Treasury bills, which paid interest rates as high as 38 percent, to mop up liquidity. However, this may have also contributed to the rise in the cost of goods. They also hoped the high interest rate of the Jobo bills would attract foreign exchange.

The economic mess got worse. Stagflation set in and GDP contracted for successive years. As a result many businesses failed.

Epilogue: Marcos bankrupted the Central Bank; it had to be dissolved and replaced by the Bangko Sentral ng Pilipinas. Its bad accounts are still being paid for by taxpayers.

Young Filipinos should learn from history.

First published by the Philippine Star

Pedro "Boo" Chanco III is a Filipino journalist with interests in economics and politics. He is currently a newspaper columnist for The Philippine Star.

Chanco studied at the University of the Philippines. He was 19 years old when he joined ABS-CBN as a cub reporter. He was one of the two reporters of the TV network, who covered the opposition party’s miting de avance which would later be called the Plaza Miranda bombing in 1971.

Chanco also became a newspaper editor of the now-defunct Manila Chronicle. He retired as Lopez Group of Companies senior vice president for corporate communications in 2010.

Chanco was one of the 12 distinguished alumni of the UP College of Mass Communication, who received the Glory Awards during the UPCMC annual homecoming in 2018. In 2019, he was awarded Newspaper Business Opinion Writer of the Year by the Rotary Club of Manila.