Filipino Scholar Walden Bello on Why the Global South Is Suspicious of U.S. Motives in Ukraine War 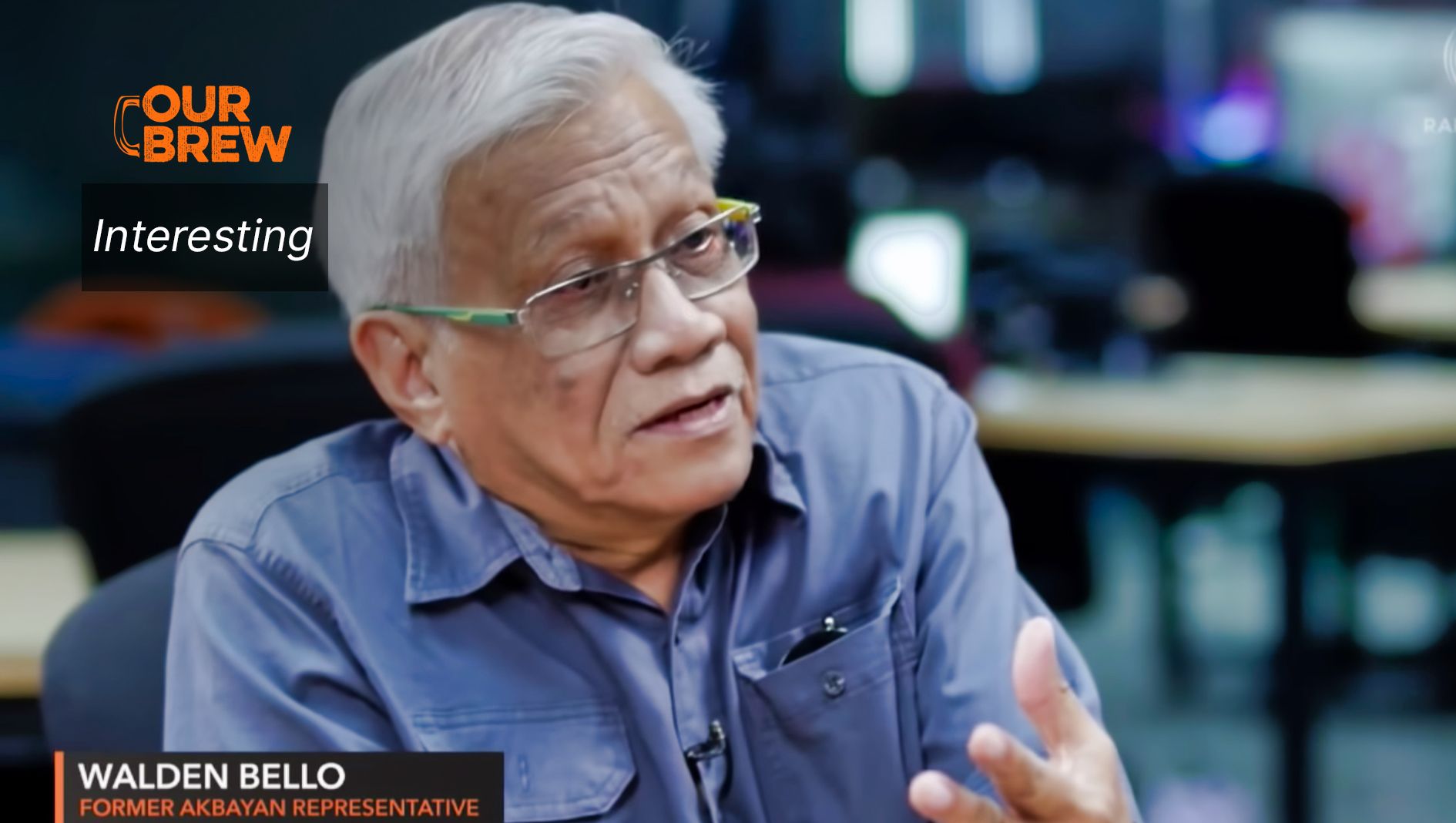 We speak with acclaimed Filipino scholar and activist Walden Bello on the Global South’s response to the unfolding crisis in Ukraine. Bello says there’s hesitation from many world leaders to take an active role in the crisis, arguing that there is a lack of explicit national interests and a general suspicion the U.S. provoked the invasion to take advantage of the subsequent backlash against Russia. He says people in the Global South realize that ever since the Soviet Union fell apart, ”NATO and the U.S. tried to take advantage of it in an aggressive eastward expansion of NATO right onto the countries that would border the Soviet Union.” Bello also expresses fear the U.S. may try to stoke tensions with China over Taiwan, saying, “China’s not interested at this point in any sort of military conflict that would jeopardize what is its big reputation right now of peaceful economic diplomacy.”

JUAN GONZÁLEZ: I’d like to bring Walden Bello into the conversation. Walden, you’ve been a leading analyst of the Global South. And interestingly, some key countries in the Global South have not been as united over this issue of condemning Russia in its invasion. I’m thinking specifically, for instance, the BRIC nations — Brazil, India — South Africa have declined to condemn Putin’s invasion. Mexico’s Manuel López Obrador did criticize the invasion but has refused to participate in any economic sanctions against Russia, as well, of course, as Cuba, Venezuela and Nicaragua, longtime enemies of the United States in Latin America, have also been muted in terms of their response to the Russian invasion. What do you make of that? And also, what’s the situation with the Philippines?

WALDEN BELLO: Yes. Thank you, Juan and Amy, for inviting me here.

I think that there is in fact this hesitation that you see across the board. I think, though, that a number of countries, including the Philippines, which was initially speaking about, you know, taking a more neutral stance, have come out with a condemnation of the invasion. But, beyond that, I think there will be not very much support across the Global South for more actively or proactively taking the side of the United States, which, of course, the U.S. wants to make a diplomatic win here by trying to get most of the countries in the United Nations General Assembly to condemn the invasion. So, I don’t think there will be many that will, beyond going from condemning the invasion, going to taking a more active role to try to isolate Russia. And that’s my sense about how things are going at this point.

One thing that people feel is, you know, that their national interests are not really involved in this in a major way. The second thing is they really fear that there is an agenda on the part of the U.S., that while this is an unjustified invasion, the U.S. has in fact provoked it and is trying to take advantage of it at this point in time. I think that quite a lot of people in the Global South realize that ever since the Soviet Union fell apart in 2001, NATO and the United States tried to take advantage of it in an aggressive eastward expansion of NATO right onto the countries that would border the Soviet Union, including the Ukraine. The other thing is it’s not only been NATO expansion; it’s also been interference, active interference, in Ukrainian politics, oftentimes supporting far-right-wing fascist groups within Ukraine. And the Central Intelligence Agency has indeed been very active in that sort of thing.

So, my sense is that one cannot discount real security fears on the part of Russia, on the part of Putin. I mean, this is almost like, you know, if you get — if Ukraine enters NATO, you’re almost creating a situation in which NATO and U.S. nuclear missiles would be right at the border of Russia, pretty much like in 1961 during the Cuban Missile Crisis. The whole rationale of the U.S. for calling that sea-wide quarantine by Kennedy was in fact to say that short-range missiles would be right about 90 miles away from the United States. So, you know, I think that is the kind of concern and fear that you have at this point within the Russian leadership, so I would not sort of say that it’s really an illusion, as one of your earlier speakers had said. That’s very real.

ACCLAIMED FILIPINO SCHOLAR and activist Walden Bello in one of his campaign materials. Walden is running for vice president.

And the problem, of course, from my point of view, is that, as our friend from Jacobin said, there really could have been a diplomatic solution to this whole thing. But the U.S. was not interested in that diplomatic solution. I think what Russia probably would have been interested in pushing was creating some sort of a neutral zone of countries, you know, bordering Russia that would in fact not be hosts for NATO and its nuclear weaponry. So, a diplomatic solution that could have created a neutral zone, you know, was pretty much, I think, the rational thing to do, given the security concerns of the Russians, as well as the independence concerns of the Ukrainians. But I think the West was not interested in that. And I think while this invasion must really be condemned, I think one must also acknowledge that the U.S. has played a provocative role in this whole thing.

The other thing that I would like to also stress is that the U.S. is desperate for some credibility at this point in time, especially after the very shameful exit from Afghanistan, in which it lost a lot of credibility globally, as well as within its allies in Europe. And I think one of the tragedies of this, Putin’s move, has been to give the United States sort of an opportunity to try to assert that sort of superpower leadership for the West.

Now, you know, some people are saying that, “Hey, doesn’t this sort of create a situation where China might be tempted to take over Taiwan?” And that’s sort of in the air, but — which is, I think, pretty silly. First of all, Ukraine is not tied to the U.S. by any sort of security treaty. Taiwan is, you know, despite the fact that the U.S. has this contradictory policy of recognizing just one China. Secondly, U.S. military forces are in the Taiwan Straits. They own the South China Sea. The 7th Fleet is there all the time, so that the Chinese are not foolish enough to think that any sort of invasion of Taiwan would be successful. The third thing is, China is not interested at this point in any sort of military conflict that would jeopardize what is its big reputation right now of peaceful, economic diplomacy that it has really been pushing. I mean, anything that would go in a militaristic direction, I think they would not be really provoked into. My worry, in fact, is that the United States, with its tremendous military forces surrounding China, from Japan down South Korea —

AMY GOODMAN: We have 15 seconds, Walden.

WALDEN BELLO: Yes — might be the one that might begin to stoke tensions over here. That’s my big worry, not about China taking over Taiwan.

AMY GOODMAN: We’re going to have to leave it there, but this is a discussion that we’ll continue. Also, just one slight correction: The Soviet Union breakup was in 1991. Walden Bello, acclaimed Filipino scholar and activist, campaigning for vice president of the Philippines, co-founder of Focus on the Global South, and Branko Marcetic, staff writer at Jacobin magazine.

That does it for our show. Democracy Now! has a job opening, human resources manager. Learn more and apply at democracynow.org.

This article is republished from Democracy Now! under a Creative Commons License. This is a portion of the original program and article, which you can read here. (https://www.democracynow.org/2022/3/2/philippines_walden_bello_nato_expansion)