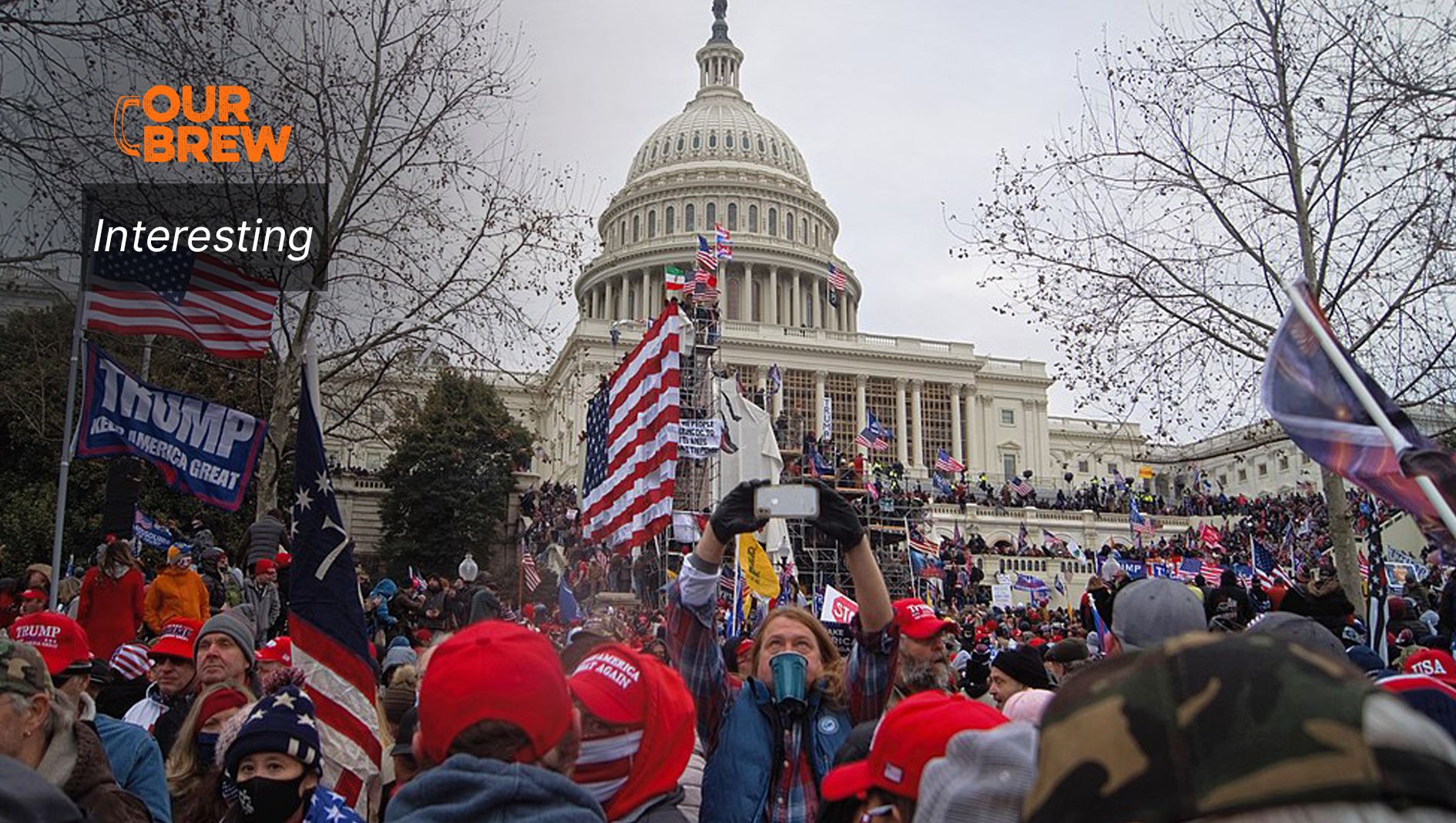 The white supremacist Proud Boys group and the far-right, anti-government Oath Keepers militia played an instrumental role in planning for a violent insurrection on the Capitol, according to the January 6 House committee, which aired new testimony from witnesses and the groups’ leaders in its first public hearing Thursday night. British filmmaker Nick Quested was embedded with the Proud Boys and shared his footage with the committee. As the first of two live witnesses, he said he was “confused” when “a couple of hundred of Proud Boys were marching toward the Capitol.”

As we continue our coverage of Thursday’s House January 6th historic hearing, we turn to the British filmmaker Nick Quested, who was embedded with the Proud Boys on January 6th. He was the first of two live witnesses.

NICK QUESTED: As stated in the winter of 2020, I was working on a documentary. As part of that documentary, I filmed several rallies in Washington, D.C, on December the 11th and December the 12th, and I learned there will be a rally on the Mall on January 6th. So my three colleagues and I came down to document the rally.

According to the permit of the event, there was going to be a rally at the Ellipse. We arrived at the Mall and observed a large contingent of Proud Boys marching towards the Capitol. We filmed them. And almost immediately I was separated from my colleagues.

I documented the crowd turn from protesters to rioters to insurrectionists. I was surprised at the size of the group, the anger and the profanity. And for anyone who didn’t understand how violent that event was, I saw it, I documented it, and I experienced it. I heard incredibly aggressive chanting. And I shared — subsequently shared that footage with the authorities. I’m here today pursuant to a House subpoena. Thank you so much.

The select committee has conducted extensive investigative work to understand what led the Proud Boys and other rioters to the Capitol on January 6th. We’ve obtained substantial evidence showing that the president’s December 19th tweet calling his followers to Washington, D.C., on January 6th energized individuals from the Proud Boys and others extremist groups. I’d like to play a brief video highlighting some of this evidence.

MARCUS CHILDRESS: My name is Marcus Childress, and I’m an investigative counsel for the Select Committee to Investigate the January 6th Attack on the United States Capitol.

PRESIDENT DONALD TRUMP: Go ahead. Who would you like me to condemn?

PRESIDENT DONALD TRUMP: Proud Boys, stand back and stand by.

MARCUS CHILDRESS: After he made this comment, Enrique Tarrio, then-chairman of the Proud Boys, said on Parler, “Standing by sir.” During our investigation, we learned that this comment during the presidential debate actually led to an increase in membership in the Proud Boys.

INVESTIGATOR: Would you say that Proud Boys’ numbers increased after the “stand back, stand by” comment?

INVESTIGATOR: And did you ever sell any “stand back and stand by” merchandise?

MARCUS CHILDRESS: On December 19th, President Trump tweeted about the January 6th rally and told attendees, “Be there, will be wild!” Many of the witnesses that we interviewed were inspired by the president’s call and came to D.C. for January 6th. But the extremists, they took it a step further. They viewed this tweet as a call to arms. A day later, the Department of Justice describes how the Proud Boys created a chat called the Ministry of Self Defense leadership chat. In this chat, the Proud Boys established a command structure in anticipation of coming back to D.C. on January 6th.

The Department of Justice describes Mr. Tarrio coming into possession of a document called the “1776 Returns,” which describes individuals occupying key buildings around the United States Capitol. The Oath Keepers are another group that the committee investigated.

ALEX JONES: You better get your ass to D.C., folks, this Saturday.

STEWART RHODES: Yeah, if you don’t, there’s going to be no more republic. But we’re not going to let that happen. It’s not even an “if.” It’s either President Trump is encouraged and bolstered and strengthened to do what he must do, or we wind up in a bloody fight. We all know that. The fight’s coming.

MARCUS CHILDRESS: The Oath Keepers began planning to block the peaceful transfer of power shortly after the November 3rd election. And according to the Department of Justice, Stewart Rhodes, the Oath Keepers leader, said to his followers that we were not going to get through this without a civil war.

In response to the December 19th, 2020, tweet by President Trump, the Oath Keepers focused on January 6th in Washington, D.C. In response to the tweet, one member, the president of the Florida chapter, put on social media, “The president called us to the Capitol. He wants us to make it wild.” The goal was for the Oath Keepers to be called to duty so that they could keep the president in power, although President Trump had just lost the election.

INVESTIGATOR: Did the Oath Keepers ever provide weapons to members?

STEWART RHODES: I’m going to decline to answer that on victim’s grounds, for — and due process grounds.

MARCUS CHILDRESS: In footage obtained by the committee, we learned that on the night of January 5th, Enrique Tarrio and Stewart Rhodes met in a parking garage in Washington, D.C.

As the attack was unfolding, Mr. Tarrio took credit. In documents obtained by the Department of Justice, Mr. Tarrio said in an encrypted chat, “Make no mistake” and “We did this.” Later on that evening, Mr. Tarrio even posted a video, which seemed to resemble him in front of the Capitol with a black cape, and the title of the video was “Premonition.”

The evidence developed by the select committee and the Department of Justice highlights how each group participated on the attack on the Capitol on January 6th. In fact, the investigation revealed that it was individuals associated with the Proud Boys who instigated the initial breach at the Peace Circle at 12:53 p.m.

MARCUS CHILDRESS: Within 10 minutes, rioters had already filled the lower west plaza. By 2:00, rioters had reached the doors on the west and the east plazas. And by 2:13, rioters had actually broken through the Senate wing door and got into the Capitol Building. A series of breaches followed. At 2:25 p.m., rioters breached the east side doors to the Rotunda. And then, right after 2:40 p.m., rioters breached the east side doors near the Ways and Means room. Once the rioters infiltrated the Capitol, they moved through the crypt, the Rotunda, the hallways leading to the House chambers, and even inside the Senate chambers.

REP. BENNIE THOMPSON: Individuals associated with two violent extremist groups have been charged with seditious conspiracy in connection with the January 6th attack. One is the Oath Keepers. They are a group of armed anti-government extremists. The other group is the Proud Boys. They promote white supremacist beliefs and have engaged in violence with people they view as their political enemies. Members of both groups have already plead guilty to crimes associated with the January 6th attack.

NICK QUESTED: We picked up Mr. Tarrio from jail. He had been arrested for carrying some magazines, some long — some extra-capacity magazines, and for the — he took responsibility for the burning of the Black Lives Matter flag that was stolen from the church on December the 12th.

We were attempting to get an interview with Mr. Tarrio. We had no idea of any of the events that were going to subsequently happen. We drove him to pick up his bags from the property department of the police, which is just south of the Mall. We picked up his bags and went to get some other bags from the Phoenix hotel.

We encountered Mr. Stewart Rhodes from the Oath Keepers. By the time I’d gone to park the car, my colleague was saying, who’d got into the car with Mr. Tarrio, that they had moved to a location around the corner, the parking garage of the Hall of Legends, I believe. And so, we quickly drove over there. We drove down into the parking garage and filmed the scene of Mr. Tarrio and Mr. Rhodes and certain other individuals in that garage.

REP. BENNIE THOMPSON: So, what you’re saying is you filmed the meeting between Mr. Tarrio and Oath Keepers leader Stewart Rhodes, right?

REP. BENNIE THOMPSON: You couldn’t hear what was said, but according to the Justice Department indictment of Mr. Tarrio, a participant referenced the Capitol.