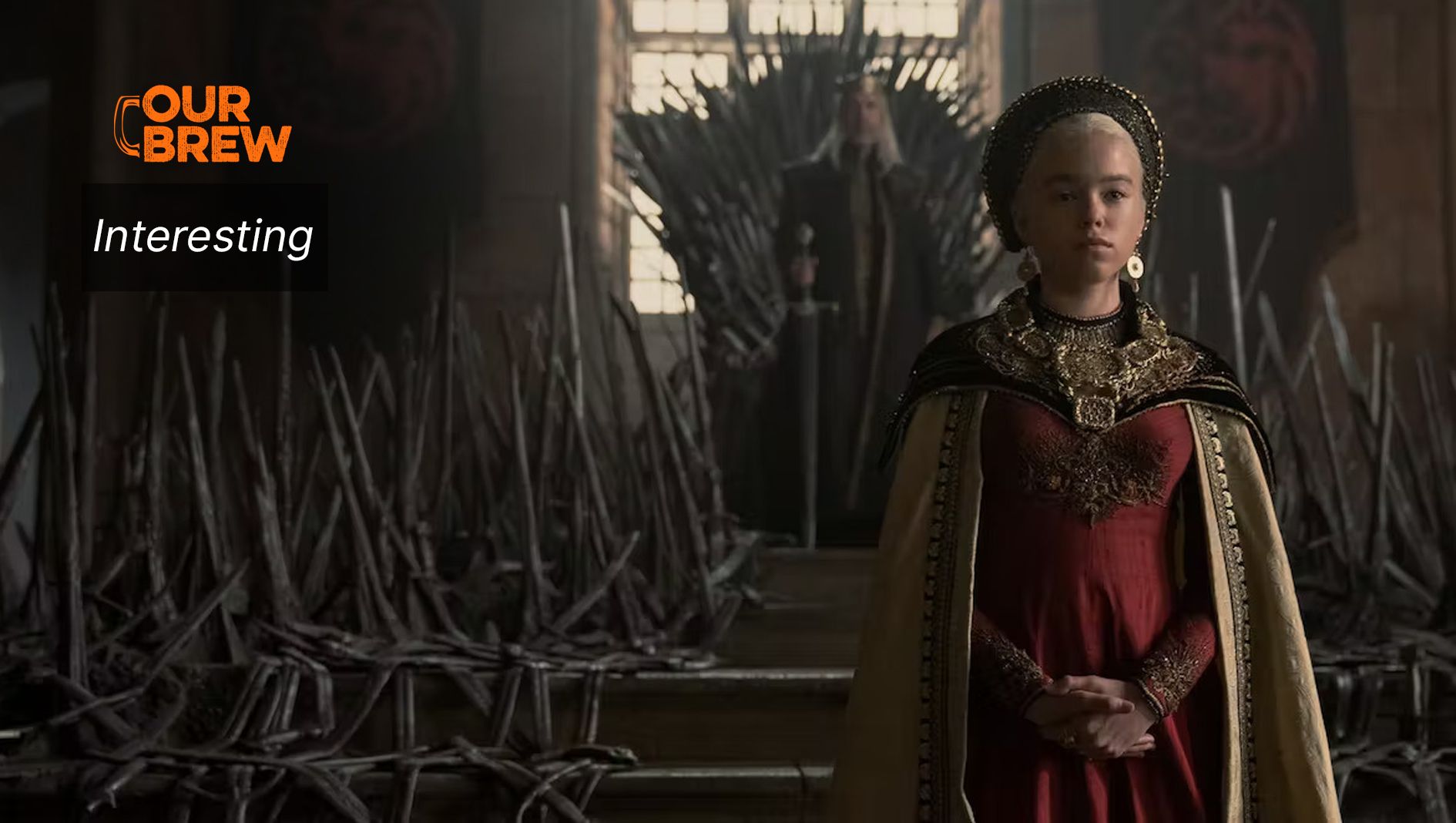 
In three decades of teaching medieval European history, I’ve noticed my students are especially curious about the intersection of the stories told in class and the depictions of the Middle Ages they see in movies and television.

Judged by their historical accuracy, cinematic portrayals are a mixed bag.

However, popular fantasy, unencumbered by the competing priority of “getting it right,” can, in broad strokes, reflect the values of the medieval society that inspires it.

“House of the Dragon” is one of those TV shows. A king, lacking a male heir to his throne, elevates his teenage daughter to be his named successor, and a complex dynastic drama ensues.

The queen as a conduit to power

George R. R. Martin, whose novels were the foundation for the HBO series “Game of Thrones,” has made no secret of his inspiration for “House of the Dragon”: the Anarchy, a two-decade period, from 1135 to 1154, when a man and a woman vied with each other for the English throne.

The story went like this: Henry I sired two dozen or more children out of wedlock. But with his queen, Matilda, he had only a daughter, the future “Empress” Matilda, and a son, William. With William’s birth, the foremost responsibility of medieval queenship was fulfilled: There would be a male heir.

Then tragedy struck. In 1120, a drunken 17-year-old William attempted a nighttime channel crossing. When his also-inebriated helmsmen hit a rock, the prince drowned.

The queen had died two years earlier, so Henry I remarried – Adeliza of Louvain – but they had no children together. The cradle sat empty and the sands in Henry I’s hourglass ran low, so he resolved that his lone legitimate child, Matilda, would have the throne as a ruling queen.

The move was unprecedented in medieval England. A queen could exert influence in her husband’s physical absence or when, after a king’s death, their son was a minor. Her role, moreover, as an intimate confidant and counselor could be consequential.

But a queen was not expected to swing a sword or lead troops into battle and forge the personal loyalties on which kingship rested, to say nothing of the misogyny inherent to medieval English society. The queen was the conduit through which power was transferred by marriage and childbirth, not its exclusive wielder.

A similar scenario drives the plot of “House of the Dragon.” The absolute preference in the fictional kingdom Westeros for a male ruler is expressed in the series’ opening scene.

The old king, having outlived his sons, empowers a council of nobles to choose his successor between two of his grandchildren, the cousins Rhaenys and Viserys. Rhaenys, a female, is the older of the two.

Yet the male Viserys becomes king and Rhaenys, “the queen who never was,” later ruefully concedes that this represented “the order of things.”

Once installed, however, Westeros’ new king would have understood the plight of England’s Henry I.

Aemma, Viserys’ queen, suffers stillbirths and miscarriages and produces only a daughter, Rhaenyra. A fading hope for a son is dashed when a breached birth and a brutal Caesarian section, intended to save the child, ends up killing Aemma. The boy – the desperately desired heir – doesn’t live out the day.

Sonless, Visery’s named heir is his younger brother, the debauched, sinister Daemon. When Daemon’s conduct becomes intolerable, Viserys disinherits and banishes him. Left with his young daughter Rhaenyra, he decides to make her a ruling queen, a role the girl relishes as she seeks to change “the order of things.”

Building support for a ruling queen

The challenge for a medieval king, whether Henry I or the fictional Viserys, was to persuade the nobles to overcome their prejudices and not just accept but actively support a woman’s ascension to power.

Henry I pursued measures to make his daughter palatable to them. Matilda, who had married the Holy Roman Emperor Henry V in 1114, returned to England a widow in 1125. Henry I, determined to forge a sacramental bond between his daughter and England’s magnates, compelled his barons in 1127 to swear their support for her as his successor. Henry I then turned to arranging a marriage for Matilda so she could give birth to a grandson and buttress her position.

After Matilda’s nuptials with Geoffrey, count of Anjou, the barons were summoned to renew their oath to her in 1131. A son, Henry, was born two years later, and a third pledge followed. Henry I died two years later of food poisoning after eating eels, a favorite dish of his.

The durability of his arrangements for Matilda’s rise to authority was immediately tested.

Viserys in “House of the Dragon” works from a similar playbook. The worthies of Westeros vow their loyalty to Rhaenyra as royal successor. Once Rhaenyra becomes marriageable, Viserys fields a plethora of suitors for her hand. A reluctant bride, Rhaenyra finally accedes to a union in which she would “dutifully” produce a male heir but then let her heart have what it wanted.

The unfortunate result is her inability to conceive with her husband while having three sons by a lover. Her situation is further complicated by Viserys’ remarriage to the lady Alicent, who gives him sons. Dangers stalk Rhaenyra’s path to power. In Westeros, as in England, a princess is expected to guard her chastity closely until marriage and, once wed, to be monogamous and not to “sully” herself in order to ensure the legitimacy of her children – a blatant double standard when noblemen frequently had children out of wedlock.

Yet even rumors of female infidelity could threaten succession. Lineage matters. Blood binds, as evident in the streams of it running from family crest to family crest in the series’ opening credits.

Did these strategies work?

Not for Matilda. Stephen of Blois, a son from the marriage of Henry I’s sister Adela to a French count, aggressively registered a claim to the crown after Henry I’s death. Many English magnates conveniently forgot their oaths to Matilda, and Stephen became king.

Matilda was not without supporters – her half-brother Robert, earl of Gloucester; her husband, the count of Anjou; nobles disaffected by Stephen’s rule; and opportunists seeking personal gain from the conflict. Matilda resisted and the Anarchy ensued.

Forces supporting Matilda invaded England in 1139 but, save for a moment in 1141, she never ruled. She then focused instead on elevating her son to the crown.

Prosecution of the war ultimately passed to the young Henry. His mounting military successes jogged the barons’ memory of their past commitments, and the contending parties reached a settlement. Henry would succeed Stephen. With Stephen’s death, Henry became Henry II. England wouldn’t have another ruling queen until the ascension of Queen Mary I in 1553, nearly four centuries later.

But what of Rhaenyra?

Westeros is not 12th century England. For Martin, the author, the Anarchy does not serve to establish historical fact but is a wellspring for his creative vision. The fire-breathing dragon – that denizen of the medieval imagination – exists in Westeros. Rhaenyra’s pursuit of the throne may be fraught with difficulties, but she is a dragon-rider, and dragons were the most fearsome military asset in the kingdom.

This makes her dangerous in a way Matilda of England could hardly have conceived. Nonetheless, “House of the Dragon,” through the lens of fantasy, reflects a slice of the English medieval experience.