Monique Wilson Talks about the Plight of Women Under Covid 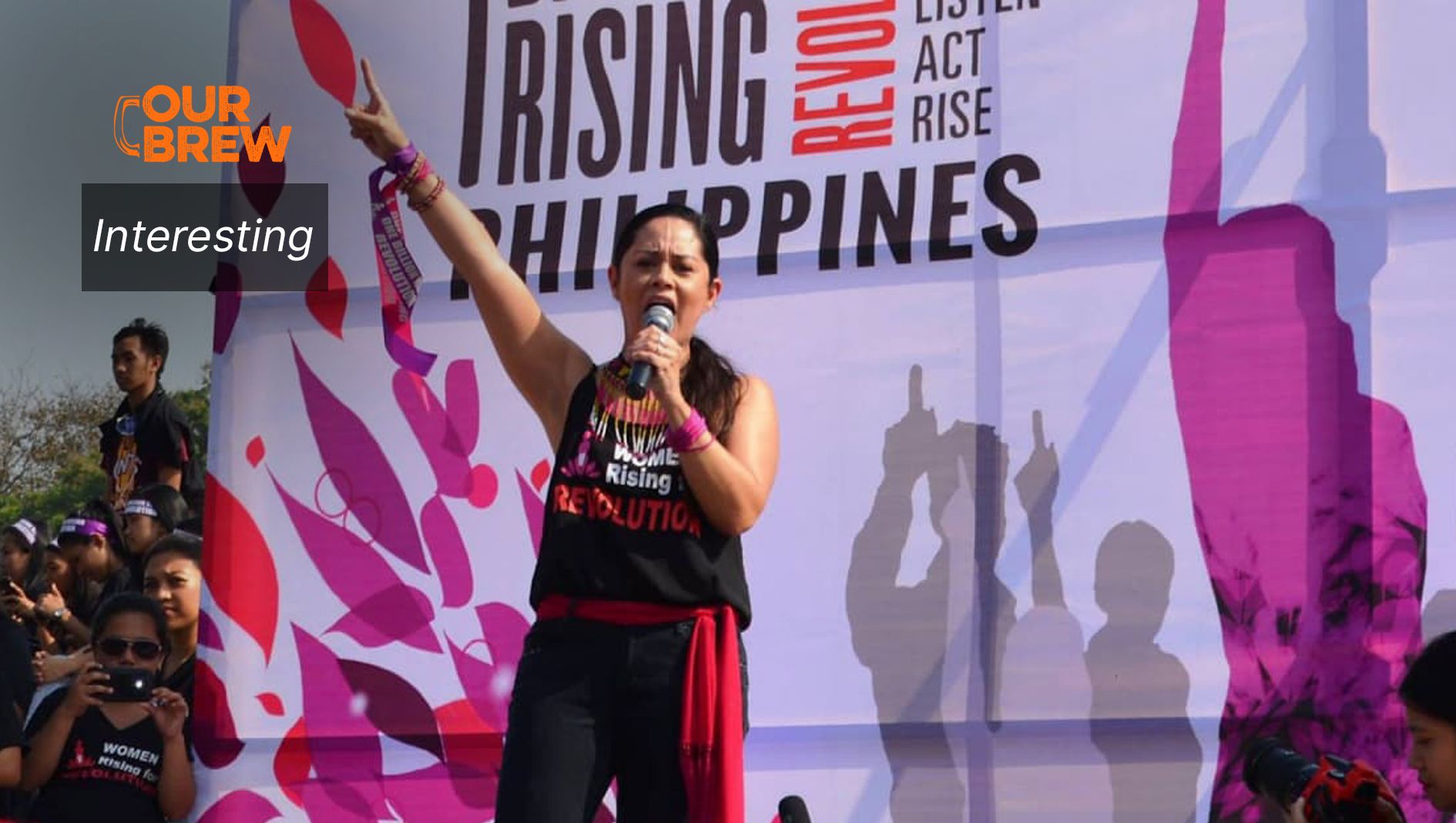 I think if governments really started to take ownership of health and just give women and people immunocompromised, but also the population at large, rights and security, then we wouldn’t have to be locked up. I mean, we have seen, this year, lockdowns, wave after wave after wave of COVID.

AMY GOODMAN: I want to bring Monique Wilson into this conversation, the global director of One Billion Rising, joining us from Manila, in the Philippines, the capital of the Philippines. Monique, you have a powerful piece in the series that was done in The Guardian, about living through COVID as an immunocompromised person. Talk about that.

MONIQUE WILSON: I think it’s been very difficult to be dealing with COVID in this time, when I am immunocompromised. I have blood cancer. But I think it really also reflects the really bad governance of our governments, because I think if governments really started to take ownership of health and just give women and people immunocompromised, but also the population at large, rights and security, then we wouldn’t have to be locked up. I mean, we have seen, this year, lockdowns, wave after wave after wave of COVID. And I think a lot of our risings this year are also an insistence and a demand that people want to get back to normal. But, you know, we’re largely left to our own devices, as always.

So, we really — it’s a call towards our governments to prop up the healthcare systems, educate the people on healthcare and really give services to the people, because I think what One Billion Rising has been pushing for forever, and what COVID has shown us, is that we have been severely neglected by all our governments for a long, long time. And I think COVID has really raised that. So, a lot of our risings now are really a demand for that, a demand for our rights to be reinstated, as well as our security and the safety, because people will not be able to live with thriving life and with aspirations if we continue to stay locked down, no matter if you’re immunocompromised or if you’re impoverished or if you’re just not in a country or a city where you have a healthcare system solid enough to really protect you and back you up.

AMY GOODMAN: And how has vaccine inequity affected women and girls?

MONIQUE WILSON: In the Philippines? Well, we saw a very delayed response with giving us our vaccines. I think this — you know, I was just sharing with people that I’ve just come, actually, from our three-hour One Billion Rising event here in Manila, which was amazing. It was a huge creative resistance event. And it was really the first year, after two years, where we were able to dance with each other, 2,000 people, were able to hug each other. Of course, here, we have to all wear masks, we have to follow all the protocols, because we’re not yet — we’ve not yet reached the vaccination level that we want to. It’s being rolled out now, but it’s still a bit slow. There’s still, of course, some vaccine hesitancy. But I think it’s also part of government neglect that they have not really pushed also education around it.

So, today was really very powerful in a way, because, you know, we’ve risen every year, thousands and thousands of people, and now we are really kind of wanting to not do it online anymore. We want to be with each other. And we will do it as much as we can protect each other. The protection is really at the forefront of everything. And we will do it with all the protocols. But we will insist now on gathering and dancing together, because the energy of that is just different. It’s just — it’s the energy of One Billion Rising that gives hope, as Colani said. It allows for transformation. It’s colorful. It’s vibrant. It’s really what creative resistance looks like.

AMY GOODMAN: And can you —

MONIQUE WILSON: So, I think —

AMY GOODMAN: Can you talk about —

MONIQUE WILSON: — COVID or no COVID, people are out.

AMY GOODMAN: Can you talk about how climate is being more and more included on the issues being addressed by One Billion Rising, you in the Philippines, of course, the Philippines hard hit by the climate emergency?

MONIQUE WILSON: Yeah. You know, one of the most interesting things about our risings, every year, but this year in particular, is that we have a lot of Indigenous community-led risings, certainly here in Asia, but everywhere around the world. Here in the Philippines, I was with Indigenous leaders today. In Thailand, Indigenous communities are leading the risings, also in Bangladesh, also in India.

And it’s really because we have to rise against the destruction of the Earth, the pillaging, the mining, the fracking. It’s really a resistance against the broken systems of capitalism and neoliberalism that, of course, are putting profit over people. So, Indigenous people, of course, are leading the way. They’ve always led the way with these protests, but they’re leading the One Billion Rising activities and protests around the issue of the Earth, because they’re the ones who can very easily put together what this means. You know, when you destroy the Earth, you destroy the women and the girls.

And here, for example, in the Philippines, we have highly militarized mining sites, 200 of them, right? And so, we have also to rise against militarization, because it’s the military that are protecting the mining sites from the people, because they are only serving the interests of the capitalists, that are of course supported by our government. So, tied to that is we have to rise to protect the Earth, rise against all extractive industries, that are pillaging the Earth and also destroying, of course, the Indigenous communities. These are, of course, led by rural women, Indigenous communities.

But we also have to rise against, as V also said, our fascist governments, because it’s our fascist governments who are the ones putting these systems eternally in place. And so, we, for example, in the Philippines, our big rising today is really because we have our national elections coming up in May. And we have to ensure that our One Billion Rising is focused on making sure that we have a much better government, not an authoritarian government, not a pro-business or pro-capitalist government and not a government that is run by fascists, misogynists, patriarchs, who are just hell-bent on destroying, as opposed to allowing things to continue to live.

AMY GOODMAN: Finally, in the Philippines, the presidential elections that will be taking place in May, you’ve got Ferdinand Marcos Jr., son of the late Philippine dictator of the same name, and the daughter of President Rodrigo Duterte widening their lead in the latest opinion polls for president and vice president. Your response?

MONIQUE WILSON: Well, that’s why our Gabriela Women’s Party, that has been sitting in Congress for many, many years now, and they’ve also been leading the One Billion Rising events, we’re working very, very hard, because we have to really raise the consciousness of people that we cannot fall back into tyrants, you know, a tyrannical rule. We cannot allow children of fascists and tyrants to continue governing this country.

So, we have to do everything we can to rise. We have to also revisit all the revisionism that has happened about our martial law years, you know, when the late Marcos really killed so many people. So many people were placed in prison. So many people were killed. We had a tyrant in place. So we have to make sure that we have to make the people rise, to really ensure that we have a much, much better government. So we have to rise fiercely. We have to rise with honesty, rise with truth, rise with courage, because here, as in many, many other countries, we also get very, very badly vilified by the sitting government, because they’re very authoritarian. We see political prisoners everywhere. We have many, many risings also that are rising for political prisoners, like what’s happening in Belarus now, what’s happening in Myanmar, what’s happening here in the Philippines.

So, the One Billion Rising really can center our focus and our energy into not allowing social media, for example, and revisionism to allow untruths and fake news to promote people who are not really able to govern, but also give people an alternative of what a future can look like. And I think that’s what One Billion Rising has always done. It’s allowed us to see the future, because we are an art and activism movement. We are a creative resistance movement. And we are allowing the imagination to be at play, that, you know, we don’t have to get stuck in these kind of oppressions and this kind of tyranny. We can rise for more, rise for better. But we need collective unity. We need collective power, collective energy to do that. And we need art to do it, too.

Coming up, “Climate and Punishment.” We’ll look at how the climate emergency is putting incarcerated people across the United States at risk of extreme heat, flooding and wildfires. Stay with us.

This article is republished from Democracy Now! under a Creative Commons License. This is a portion of the original program and article, which you can read here. (https://www.democracynow.org/2022/2/14/one_billion_rising_gender_based_violence)