Objectively Speaking: Is Russia's Invasion a Just War? You Judge 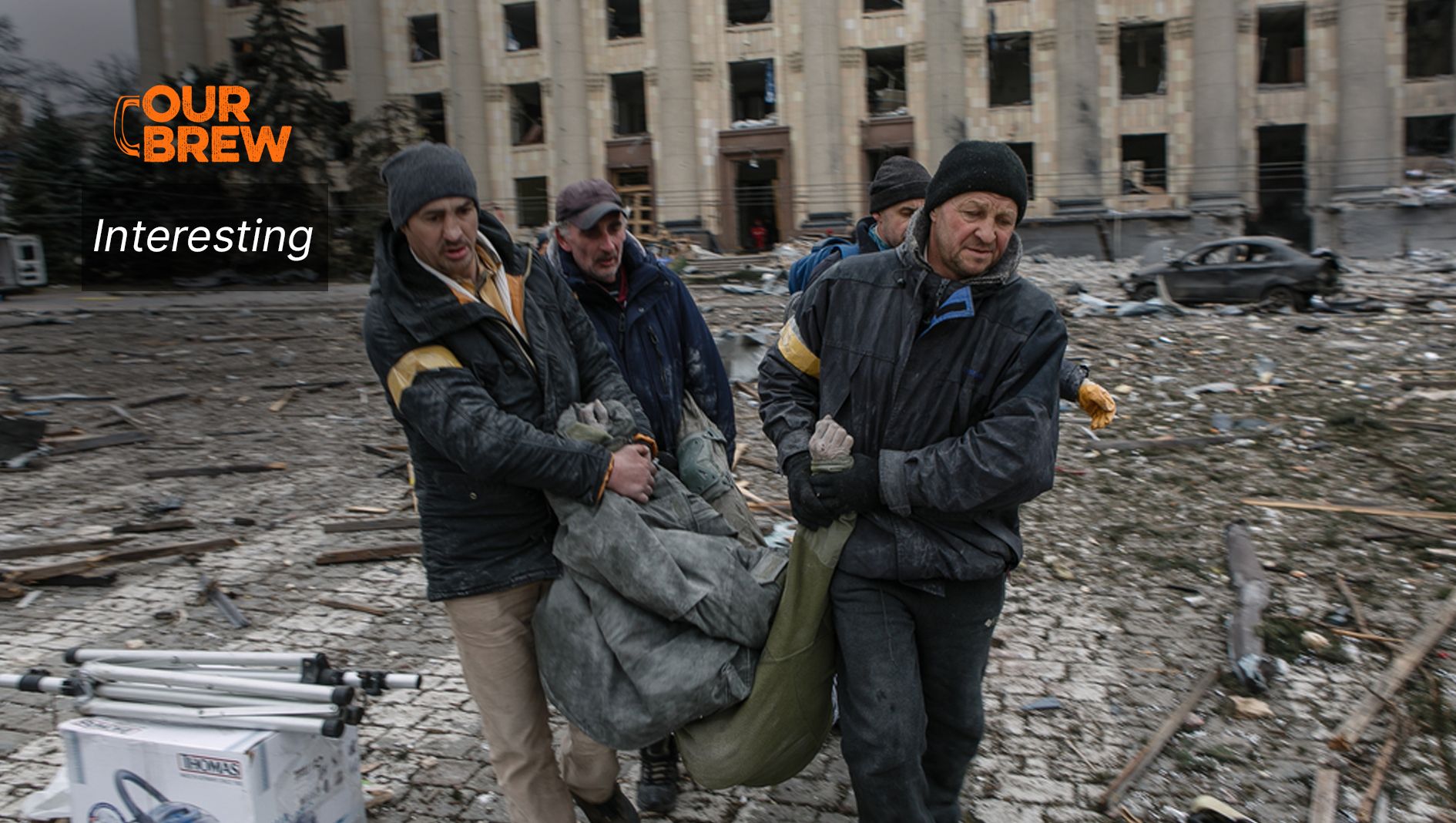 There are basic agreements about what makes a war morally defensible: a set of ideas known as the “just war tradition.”

How do Russia’s reasons for war stack up? An expert on ‘just war’ explains


War is always a tragedy. It sometimes seems inevitable. But is it ever justified?

Philosophers, theologians, politicians and military leaders have wrestled with this question for millennia. And to a large degree, they’ve come to some basic agreements about what makes a war morally defensible: a set of ideas known as the “just war tradition.”

That’s not to say that they always agree on how to apply just war principles to an actual conflict. Given the Kremlin’s attempts to justify its invasion of Ukraine, including its groundless accusations of genocide, it’s worth analyzing Russia’s position through the lens of the just war tradition – the focus of my work as a political scientist who studies the ethics of conflict.

Many religions, including Judaism, Islam and Hinduism, have traditions about when war might be justifiable.

Although many contemporary approaches are secular, they have been particularly influenced by Christian thinkers. This tradition dates to the fourth century, when Augustine of Hippo, also known as St. Augustine, grappled with how people could reconcile their beliefs about nonviolence with political and military service to their country.

Ultimately, the tradition evolved to encompass six principles to evaluate the justness of a war: legitimate authority, just cause, proportionality, likelihood of success, last resort and right intent.

Historically, just war analysis began by asking about legitimate authority. Had the war been declared by a responsible sovereign? In the classical just war tradition, the right to wage war was limited to the highest secular authority in a particular political community.

Today, some scholars suggest that only the United Nations holds this authority, since the U.N. charter has outlawed the use of force except in self-defense. And Vladimir Putin’s legitimacy can certainly be questioned, given the lack of free and fair elections in Russia.

However, classical just war thinkers were deeply concerned about civil disorder. Thirteenth-century scholar Thomas Aquinas went so far as to caution against overthrowing a tyrant if the community would suffer “greater detriment from the ensuing disorder than it did from the tyrannical government itself.”

To be justifiable, a war must also be fought with the aim of accomplishing a just cause. Traditionally, two motives were considered just: self-defense and righting wrongs. Aquinas defined a just war as one fought to “avenge injuries, if some nation or state … has neglected to punish a wrong committed by its citizens, or to return something that was wrongfully taken.”

These are slippery definitions, and the Kremlin has argued for war in Ukraine on both counts.

First, does Russia have a legitimate self-defense claim? Russian officials have repeatedly claimed that Ukraine poses a threat to Russian security because of its potential admission to the NATO alliance.

But joining NATO is a lengthy, complicated process that requires significant reforms within the aspiring member state and unanimous agreement from the existing members. Many member countries have been resistant to the idea of enlarging NATO to include Ukraine, although the nation has been cooperating with the alliance for decades.

Putin has also claimed that Ukraine seeks to “bring war” to Crimea, which Moscow annexed in 2014, and that it has “laid claim to several other Russian regions.” Yet the Ukrainian government denies any plan to forcefully retake the occupied territories. What’s more, Ukraine’s standing army is just a quarter of Russia’s, and its air force, less than a tenth.

What about Russia’s justice concerns?

The Kremlin claims that Ukraine is committing genocide against Russian-speakers in the self-proclaimed Luhansk and Donetsk People’s Republics, where separatists supported by Moscow have been fighting Ukrainian forces since 2014. That conflict has killed more than 14,000 people, including more than 3,000 civilians from both sides, though the scale of violence had decreased dramatically in recent years.

But the conflict in this region, known as the Donbas, fails to meet the legal definition of genocide, which separates tragic but unintended civilian casualties in war from deliberate attempts to destroy a people. There is simply no evidence corroborating Russia’s claims. Nor is Ukraine a fascist state, despite Putin’s claims.

Moscow’s concerns that Ukrainian-language policies discriminate against Russian speakers, who make up about a third of the country, have some validity. Still, the new law does not ban the use of Russian, despite Kremlin media reports to the contrary.

Even if protecting language rights were a just cause, justifying war would be difficult because of another principle: proportionality. All wars cause harm, but a justifiable use of force cannot cause more harm than the good it hopes to promote.

Russia’s war has already led to significant damage to civilian areas in major cities. As of March 3, 331 civilians had been killed, according to the U.N., and deaths will likely rise as Russian forces increase their attacks on cities. One million people have already fled the country.

The weakness of Russia’s claimed just cause means that this war cannot be considered proportional. As Catholic philosopher Francisco de Vitoria put it in the 16th century, pursuing “trivial offenses” by military means is wrong because of the “cruel and horrible” effects of war.

The logic of proportionality also requires considering the probability of success. As one contemporary ethicist put it, “‘probability’ is considerably more likely than a mere ‘hope,’ ‘chance,’ or ‘possibility.’” There must be a real chance that the use of force can actually accomplish the war’s stated aims.

At first glance, this principle might seem biased against the weak. Some scholars have argued that countries should be allowed to defend themselves from aggression, even if the chances of success aren’t high.

If the Kremlin’s war aims could not be achieved, any war it initiated would be inherently unjust, as lives would have been sacrificed to no avail. And as Western pundits and at least one retired Russian general have warned, Russian attempts to take over all of Ukraine would likely generate a drawn-out insurgency.

The principle of “last resort” demands that all other reasonable means of resolving the conflict must be exhausted before going to war.

The day before the invasion, Putin claimed to be willing to negotiate. Yet as alarm spread in early February about Russia’s force buildup, the Kremlin spurned cooperation with the Organization for Security and Cooperation in Europe, an intergovernmental institution that aims to reduce military tensions by fostering transparency. Ukraine asked for clarification about Russia’s forces near its border, as OSCE members must give prior notification for exercises involving at least 9,000 troops. But Russia refused to attend joint sessions on the matter.

Security analysts have argued that Russian draft agreements presented to NATO and the United States in December 2021 seem to have been intended for rejection, though the U.S. and NATO responded by suggesting talks on nuclear disarmament and missiles.

By contrast, as late as the day before the war, Ukraine was still calling for a diplomatic solution while responding to increasing threats with significant restraint.

Finally, the principle of right intent asserts that the attackers’ stated cause must be the actual motivating cause.

This principle is difficult to weigh. Putin’s rhetoric is preoccupied with the supposed glories of the Russian Empire and the Soviet Union, and even his own legacy

It’s impossible to know with certainty what someone is thinking, but measuring people’s actions against their claims is one way to evaluate intent. Claims about protecting Russian speakers ring hollow as escalating violence endangers Russian-speaking Ukrainian soldiers and civilians. The Kremlin’s fast-track process of giving Russian citizenship to Ukrainians in the Donbas jars with claims that Russian citizens must be rescued.

The Kremlin clearly sought a plausible moral justification for its war. Failing to find one, it will likely find itself even more isolated on the world stage.

[Over 150,000 readers rely on The Conversation’s newsletters to understand the world. Sign up today.]