Privilege, Pantries, and the Poor 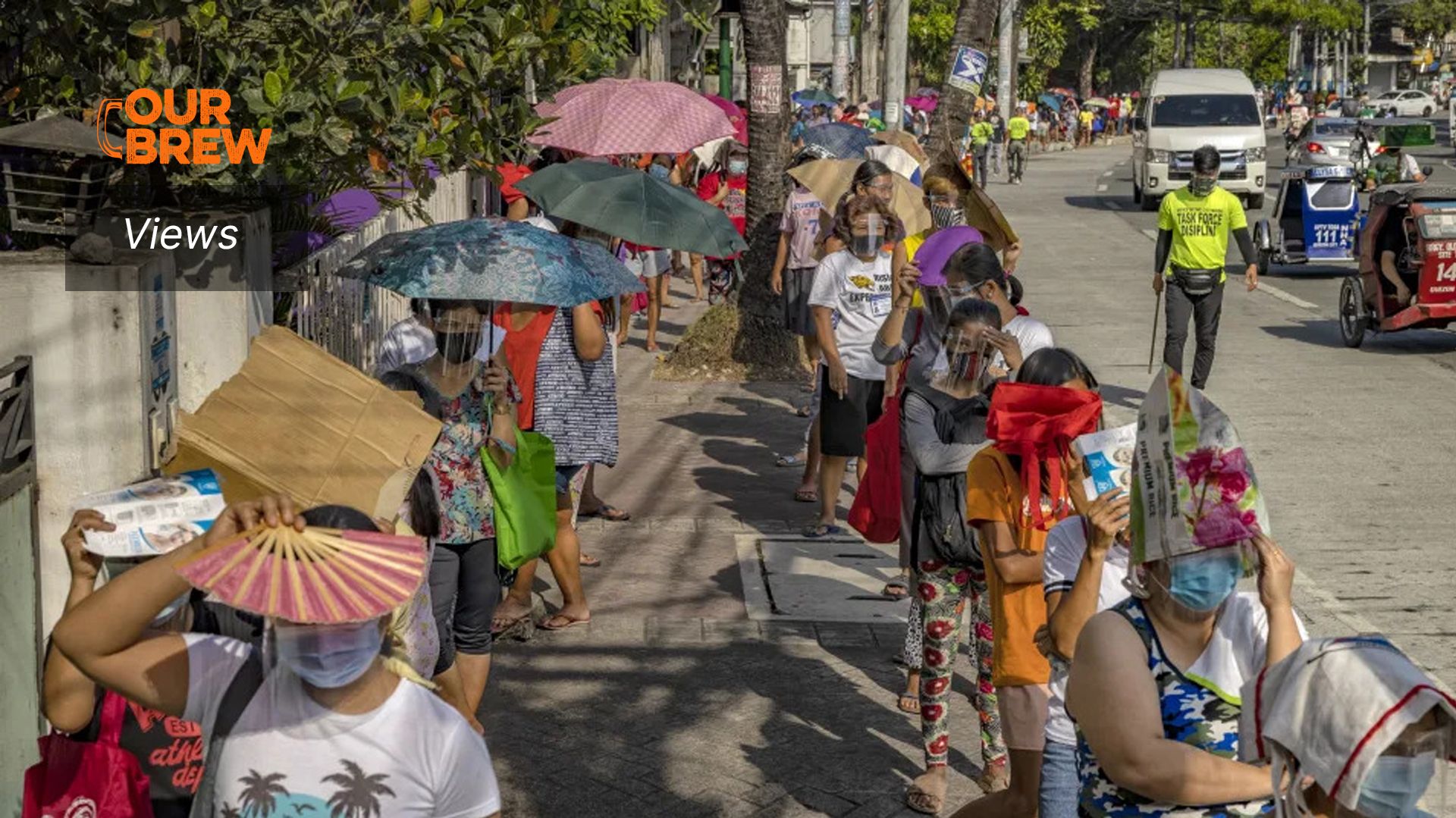 ‘Encouraging the poor to travel from their communities, with the little cash that they have, so they might fall in line for a pantry where they are implicitly told to take little, is just unkind.

It is also reckless’

Let me start by saying: yes, government is responsible for this state of affairs. For the hunger. For the need and want. For the crisis that we are in, one year in this Covid-19 pandemic, with no free mass testing, no proper contact tracing, no reliable assistance for the most vulnerable, no real support for our healthcare system. One year of a Duterte government completely and utterly refusing to deliver a compassionate, competent, science-based response; one year of Duterte saying “wala na tayong pera”; one year of periodically hearing him say “wala na tayong magawa”; and this first four months of 2021 where the narrative about vaccines has been about richer countries getting our share, when in reality, it is Duterte shoving Sinovac down our throats instead. The past month of Duterte promising: things will get worse. At the same time that he says: I don’t know if we can vaccinate everyone. And also: We have done everything we can.

Yes this governance is the worst we could possibly have, especially in the midst of a public health crisis that at this point is also a socio-political-economic crisis. Yes, we want a better leader, and we work on it for 2022, but we would be glad if we could get one sooner, via a resign movement or an oust movement, both of which can only help us in building a real case against a continuation of this Duterte leadership (in the characters of a Marcos and Pacquiao).

But standing clear on the faults of this government, demanding accountability, insisting that we deserve better, does not absolve us of responsibility. It does not mean we can just do anything and be deemed faultless, it doesn’t mean we will not make mistakes.

We might be on the side of democracy, freedom, and rights, but that doesn’t mean we’re doing everything right.

This is even truer now, given the community pantries with long lines, as well as the narratives that it has created space for, the notions of the poor that it has lived off. In the course of the pantry’s virality, what has been dissolved is its core of community, what has disappeared is a basic grounding in what the poor need, who is responsible for this state of affairs, and the truth that the goal of any relief operation—and this is what the pantries are—is to make itself obsolete. What we have refused to say is that there is a virus, with variants that are not only more dangerous, but also which spread the virus quicker.

These erasures are not minor ones, and it is wrong to think that these do not matter. When what you do can be taken against you, you want to make sure that you do things better than the Duterte side. The pantries have failed at this, no matter how we silence the criticism against it.

It happened slowly, but it was there from the start. Yes, the Marxist slogan was there, and yes the intent was sincere. But both were framed in photographs and a narrative—social media content—that talked about the poor in a particular light: as people who will get little even when they themselves have little. This is a romanticization of the poor that is borne of a privileged gaze, and while there is nothing wrong with telling these narratives as starting point, it is our responsibility as the ones who hold the phone camera, as the ones with words and (social) media mileage, to complicate this telling. It is our responsibility to ensure that we go beyond this way of seeing, because magnified, it becomes truth. Magnified, it can be weapon.

As it has become. Where the poor who take little from the pantry are celebrated, the ones who take more are attacked and cancelled. What surfaces is an imaging of the poor that is unkind and unjust—and that goes even for the gaze that decides only to see the poor old man who took a tali of sitaw and a sliver of kalabasa from the table. We forget that this particular act of seeing, is also a viewing: we are watching as they approach that table, we watch as they take from it, we watch their faces as they leave with the little they were implicitly told they were limited to getting.

Even we would be embarrassed to pile our plates high with food at a free buffet. Told to get anything you want from a box of free stuff, you think twice, you look around, you wonder if anyone’s watching. Why do we imagine that this experience of a table with limited goods is any different for the poor?

There is a violence in this act of seeing because it is an act of watching.

As there is violence in erasures.

When farmers and fisherfolk, themselves ideally the recipients of these pantries, are fashioned into the poor who are selfless, because the narrative is that despite their own poverty they will share their “surplus” with others, you know that you have erased the privilege that is at the core of the community pantry, as you are erasing the injustice and oppression that are in the lives of those on the opposite side of the table.

Lest it’s not clear, our farmers and fisherfolk, the ones who are suffering the brunt of Duterte’s failed pandemic response and its economic repercussions, the ones who have suffered long before it, from land grabbing and displacement and reclamations and government’s anti-people, pro-big-business, pro-China projects—these farmers and fisherfolk do not have surplus. And neither do the poor nanays and tatays in communities, the jeepney drivers disallowed from plying the roads, the workers who are victimized by low wages, no security, and no benefits. Selling the narrative that the poor have “surplus” is not only absurd, it is dangerous as it becomes useful for those who earn off the backs of the oppressed and vulnerable.

But just as problematic is the erasure and denial of privilege, that one that is at the heart of the community pantry, which is premised on the idea that the ones who have the privilege of excess, can share with those who have none. It is this premise of privilege that limits the imagination of the pantry to its smallness and its transience: the pantry begins and ends with the ability of the privileged to give, where it is focused on providing as much as it can to those who don’t have any, within the same small space. (And don’t start with me about that Marxist quote: its context is a higher phase of communist society, the complete erasure of the bourgeoisie—malayo pa tayo do’n, obviously.)

The decision to raise funds or ask for goods beyond the community of one pantry, and inadvertently encouraging the poor to come in droves to the pantries they see on TV, defeats the pantry’s purpose. You lose “community” and the notion of assisting your neighbors; you lose the time and energy you need to forge connections within the community, across the privileged and the poor, towards standing in solidarity, beyond this act of charity.

More importantly, encouraging the poor to travel from their communities, with the little cash that they have, so they might fall in line for a pantry where they are implicitly told to take little, is just unkind.

It is also reckless.

There is no reason to watch a line growing longer by the day, a line that starts at 4:00AM, long before the pantry’s open. There is no reason to decide to continue to do it this way, even when the kinder thing, the more just way, is to go to communities. There is no excuse for insisting that this is the best way to feed the hungry, when the safest thing to do—given a public health emergency and a virus that spreads quickly—is to stop encouraging people to come and fall in line, and instead figure out a way to get to these people.

It is more work for sure, and it won’t go viral or trend because it is what many have been doing since last year, but if the goal is to feed the people, if the task is to address the hunger, there is no need to put on a show with the poor as unwilling participants. It would simply be making the choice to get the food to them in the safest, kindest way possible.

Mahirap na nga ang masa, pahirap na nga ang gobyerno, pinahihirapan pa natin sila lalo. And in the time of a pandemic, given these surges, a healthcare system that is STILL at breaking point, and a government that refuses to act on our health needs, there is no excuse for risking virus spread, in long lines and crowds made up of people from different communities, with no clear way to do contact tracing, no sense even, of monitoring who has arrived, where they come from, and if/when they might get sick.

This is the conversation no one wants to have, but it doesn’t mean it’s not a conversation worth having. In fact, in this case, it’s the most important conversation because of Covid-19, and the truth that surges are the worst in poor communities. That no one dares point out how high-risk these pantries’ long lines are, and how dangerous it is both for the communities from which the poor come, and the communities that host the pantries, makes us all complicit. That we have fallen silent makes it impossible for us now to criticize Duterte for the long lines for ayuda and the difficulty they puts the poor through to get it.

One understands that no one wants to rain on a feel-good parade, and yes, we could all use some hope. But hope should not be equated with blindness. Certainly it doesn’t mean losing all sense of criticality. At the very least, hope shouldn’t be about risking the lives and health of the poor, just because we have the excess and the mileage to do pantries.

Because hope should not be about privilege. But this pantry makes it so.