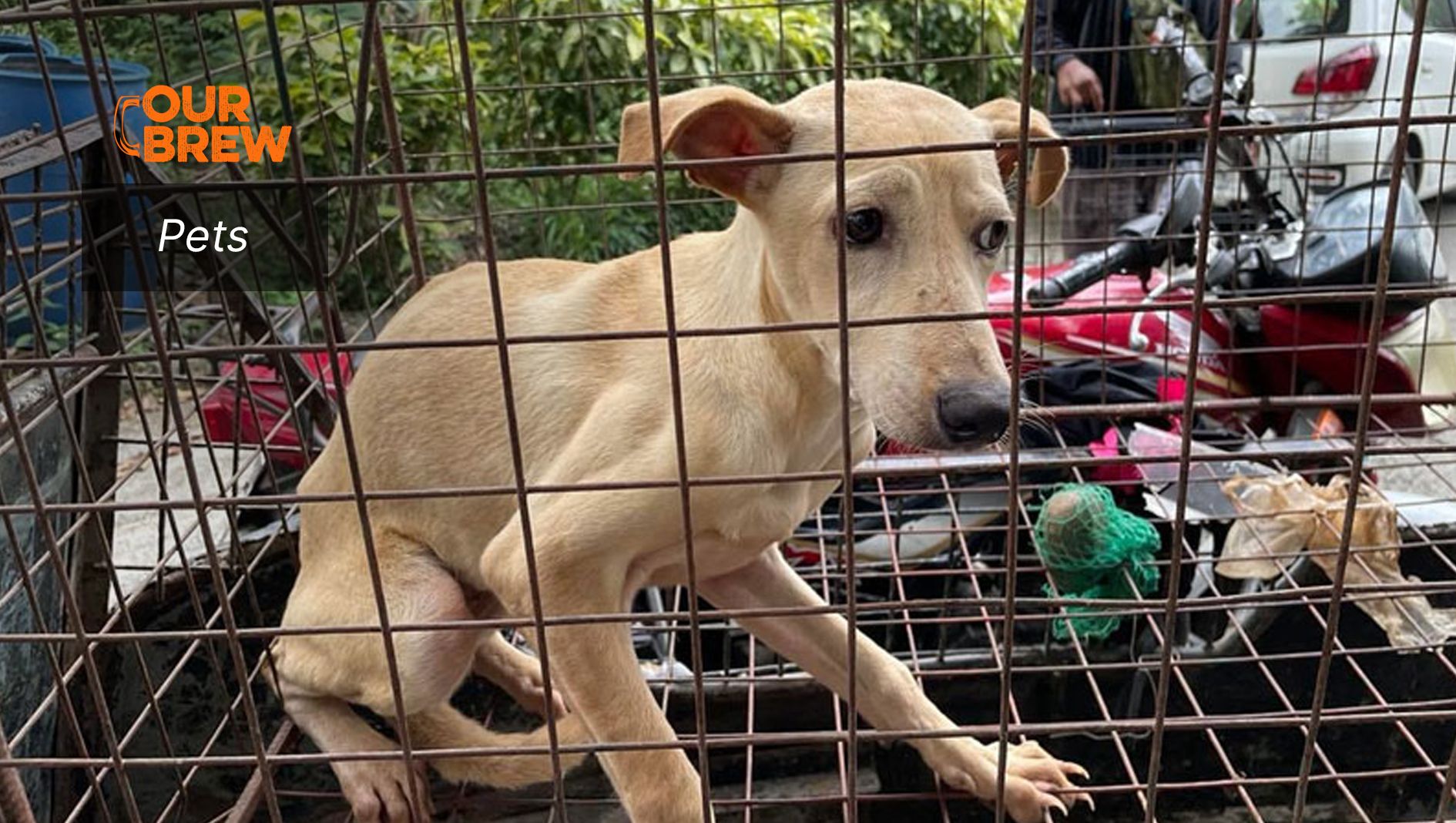 Some residents in a subdivision in Antipolo City have expressed apprehension over the presence of stray dogs. They are afraid family members, specially their small kids, might be bitten by the dogs.

The easiest thing to do is to complain to the city vet office and ask that the stray dogs be caught. Stories of many a homeowners association asking pounds to get stray dogs and cats abound. It is easier that way. Just get rid of the dogs and cats they consider as pests.

But there are a number of residents of the Beverly Hills subdivision who are animal lovers. Their love for dogs and their conscience won’t allow them to report the dogs and have them caught by the pound.

These animal lovers know that dogs—owned or strays, caught by pound catchers or surrendered by owners– are killed in the pound as the city vet office (CVO) has no funds to maintain a shelter for dogs and cats. The mandate of the CVO is to put to sleep (PTS) all animals caught or surrendered, a term that simply means to kill the animal.

Lalay de Guzman, a resident of Beverly Hills subdivision in Antipolo City, asked Save ALL- Animals of Love and Light Inc., a SEC-registered non-government organization, for help to save the dogs, to keep them from ending up in the kill pound.

“Being brought to the pound is like a torture/ death sentence. The dogs often starve before they are put down, “ Lalay said.

Save ALL Inc. asked Aileen Talento Papeloña, an admin and manager of the shelter of Cavite-based Tails of Freedom Animal Haven, if they can take in homeless dogs. Aileen said yes, and the process of rescuing the poor dogs and giving them a new lease on life started.

Lalay asked residents to help put together funds for the rescue, the transporting to the clinic and shelter, and distemper test for dogs.

Many residents responded to Lalay’s call for help and donated funds for the rescue, transporting, distemper tests, anti-tick and flea preventive, and dog food (one sack). They are:

Another resident, Miguel Castro, donated a 25-kilo sack of rice.

Asked why they helped save the dogs, Amor Quiniones said: “I truly love dogs, and its biblical. It says on Psalms 36:6 ‘You, Lord, preserve both people and animals.’”

“I’ve always, always felt responsibility toward animals around us…especially animals, both dogs and cats who we as humans have failed one way or another. Scripture talks about the wicked abusing animals. I think there’s a special place in hell for people who abuse animals, through outright abuse, neglect, or abandonment.”

Miguel Castro, on the other hand, said he helped because he believed in Lalay’s advocacy. “…ang ganda po ng advocacy nyo (referring to Lalay) about animals, specially sa mga strays.”

Lalay also wrote the Beverly Hills Homeowners Association (BHHA) to ask for help to identify which roaming dogs are owned or strays on the day of rescue.

The maintenance men who caught the dogs are Michael Lacaba and Junior Rosauro. Vangie Mercado, BHHA staff, assisted and coordinated.

One dog was rescued on January 26 and three dogs were rescued on March 12. The residents pooled together P16,500.00 to transport the dogs to the clinic for distemper test to ensure that no dog is a carrier of this fatal disease. They also put anti-tick and flea preventive on the dogs to make sure that the dogs have no ticks that are carriers of erlichia, a disease that can cause paralysis and even death. A responsible rescuer always ensures that the dogs in the shelter will not get sick even if new rescues are taken in.

With the funds, Aileen paid for two transporting– for Hillary on January 26 and for Quatro, Dos and Beverly on February 12.

The four dogs are now safe in the shelter.

Lalay, who shared a photo of Quatro sitting comfortably on top of a table in the group chatbox (GC) with donor-residents, reported:

“The black rescue is so at home na sa shelter We call him Quatro. Medyo makapal na (ang mukha) ”

Jeri remarked, “I’m sure he knows he’s finally safe. They all look great.”

A real rescue does not only mean getting the dogs off the streets or from the pound. There are a lot of important things to consider and do:

1. A responsible rescuer will not bring the rescued dog or cat directly to the shelter. The dog or cat might be suffering from a highly infectious disease like distemper for dogs and calici virus for cats. Resident rescues might be infected. Treatment costs a lot and some may even die.

2. Thus, a responsible rescuer will bring the dog or cat to the vet clinic first for assessment and tests, to get the dog treated if he or she is sick, or to clear the dog of any illness.

3. If the dog or cat is healthy, it is important to have the rescue given two shots: an anti-rabies shot and the first of 3-4 vaccines (depending on the animal: 3 for dogs, 4. for cats) to give the animal some protection from illnesses.

5. Always assume the dog or cat has no vaccine against illnesses. Please have them injected with the 5-in-1 or 6-in-1 vaccine for dogs, and the tricat for cats. One shot is not enough, we have discovered. It is always best to follow the required number of shots during the first year of the dog or cat. The booster shot is the only one that is given once every year. Some shelters, which do not allow entry of dogs without complete vaccines, give the booster shot every two years. We do not give 7-in-1 or 8-in-1 because several vets told us these are too strong for the dog.

6. If the dog or cat is ill, then the vet will give the rescuer a choice: whether to do home care or to have the rescue confined, depending on the illness.

7. Tests that should be done for dogs– because these illnesses are highly contagious —include:

– distemper test for all dogs

8. Tests that should be done for cats:

9. Ask the vet for anti-tick and flea preventive for the dog or cat so that the rescued animal will not bring ticks and fleas inside the home or shelter.

10. If the dog or cat is sick, make sure the caretakers handle the dog or cat with care as one should always assume the animal has no anti-rabies shot yet. Wear thick gloves when handling the dog or cat if you opt for home care. But I truly advise you have the dog or cat confined to keep the humans and resident animals in the shelter safe. Always consider the safety of humans when caring for the animals.

11. Some shelters opt to give their caretakers a pre-exposure shot (anti-rabies) to give a little protection for the humans. Still, it is best to have the animal injected with the anti-rabies shot prior to bringing to the shelter or your home.

12. At the appropriate time, a responsible rescuer will have the dog or cat spayed or neutered to prevent pregnancies.

13. A responsible rescuer looks for adopters as the cost of maintaining a shelter increases with more rescues. If dogs are adopted, one will have room for other rescues. But if you add more rescues without having dogs adopted, then you will soon face a financial crisis. How will you be able to provide good food and vitamins when donations start to dwindle or do not come anymore? The dogs will surely suffer. You did not rescue them from the streets or pounds or abusive owners only for these poor animals to end up starved and sick in your shelter.

I salute all who want to rescue animals in need. I salute all the more the humans who rescue responsibly, who ensure the dogs they save will finally enjoy a good life. I am so saddened by humans who say they are rescuing when conditions in their shelter are worse, where animals starve to death, where an animal’s suffering is prolonged because the animal did not get the medical care it needs. That is animal abuse, not rescuing. May love and light strike your hardened heart to make you stop using the dogs and cats for your selfish reasons.

I salute the Bevery Hills residents and the homeowners association, Tails of Freedom Animal Haven, and all those involved in the rescue of these homeless dogs who would have ended up killed in the pound. May more subdivision residents and homeowners associations help stray dogs be rehomed, adopted, or taken in by shelters, instead of having them impounded and killed.