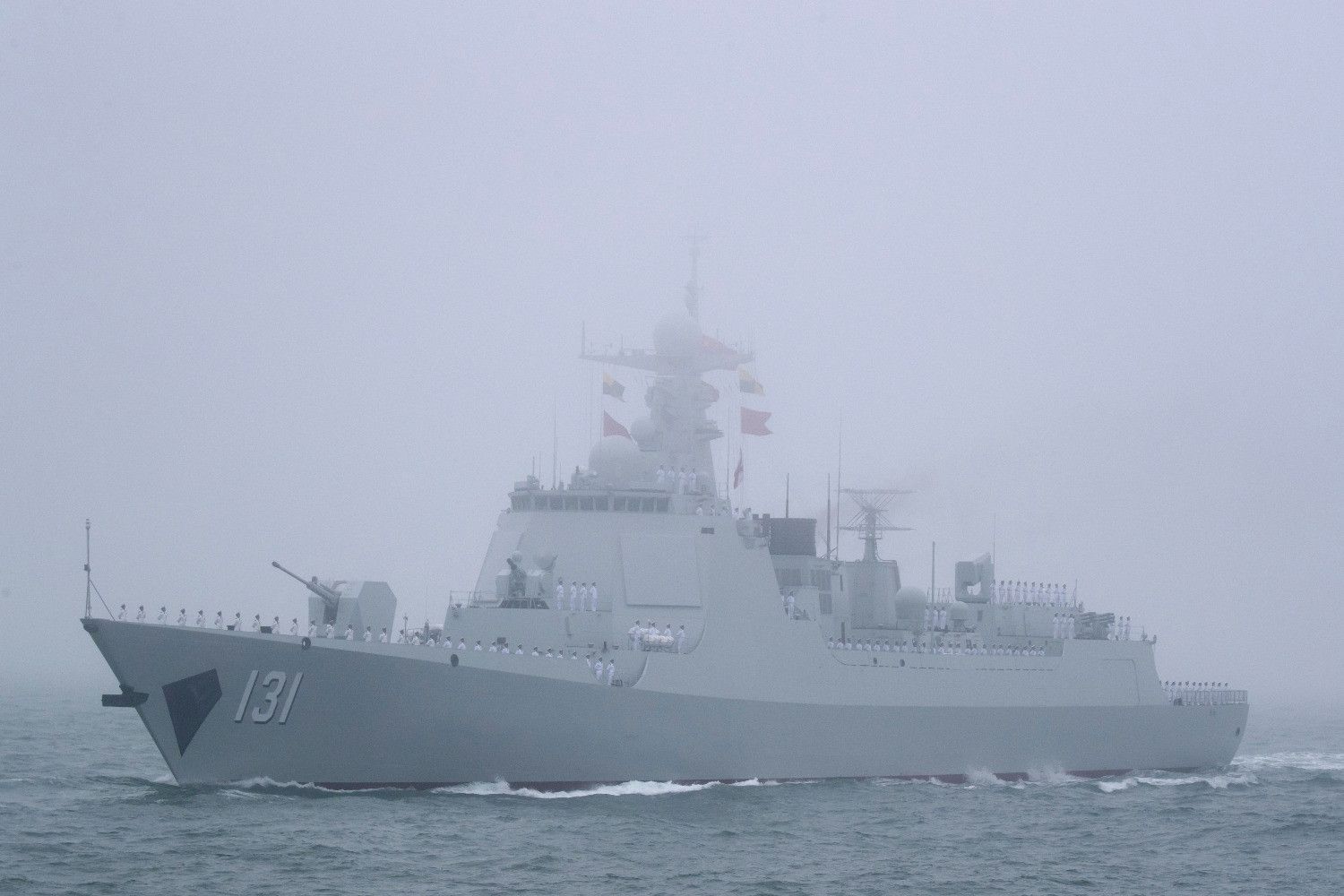 Reports that the Department of Foreign Affairs might expel the spokesperson of the Chinese embassy for his disparaging remarks against Defense Secretary Delfin Lorenzana point to an escalation of the word war between Manila and Beijing over the presence of Chinese maritime militia vessels at Julian Felipe Reef.

But this is just the latest clash between the two countries over China’s aggressive moves, as this 2020 article reminds us. Since then, the United States has taken a harder position against China’s aggression. And while the Defense and Foreign Affairs Secretaries continue to pounce on China, President Duterte, says his spokesperson, remains committed to resolve any dispute through peaceful means

On April 22, the Department of Foreign Affairs (DFA) filed two diplomatic protests against China, accusing it of violating international law and Philippine sovereignty.

According to Secretary of Foreign Affairs Teodoro Locsin Jr., the notes sent to the Chinese Embassy in Manila were on two different issues. The first concerned a February 17 incident in which a People’s Liberation Army Navy (PLAN) ship aimed its gun control director toward the Philippine Navy’s (PN) anti-submarine corvette BRP Conrado Yap in the Spratly Islands. The second objected to China’s declaration of the Spratlys, including those claimed by the Philippines, as a new district within Hainan province.

The February 17 PN-PLAN incident is the more serious of the two because it could have led to a use of force potentially escalating into a major armed conflict in the South China Sea. The DFA was well aware of the possible diplomatic and strategic ramifications of this incident.  It kept the incident away from the public since it could adversely affect the current Philippines-China rapprochement.

Foreign Secretary Locsin admitted that the foreign office worked “the whole day” drafting the diplomatic protest. However, he declined to discuss the specific details regarding the incident, saying “diplomatic notes are strictly confidential between two states parties.”

The following day, however, Defense Secretary Delfin Lorenzana ordered the PN to provide the public with an account of what had happened. At that point, the Armed Forces of the Philippines (AFP) Western Command (WESCOM) released a statement detailing the incident between the Conrado Yap and PLAN corvette.

The BRP Conrado Yap is the PN’s latest addition to its inventory of ships. South Korea donated it to the Philippines in August 2019. Formerly the Chungju, it is a Pohang-class corvette that has been designed and deployed for anti-submarine warfare.

According to WESCOM, the Conrado Yap sailed out of Puerto Princesa City in Palawan on February 15 to conduct territorial defense operations and sovereignty patrols in the South China Sea. It was to begin its patrol at the Malamapaya natural gas project and then make a circuit of the Philippine-held islands in the Spratlys.

Since he assumed office in mid-2016, President Rodrigo Duterte has pursued an appeasement policy toward China. This policy has involved efforts to foster closer diplomatic and economic relations with China, accompanied by calculated moves to strategically distance the Philippines from the United States, the country’s only treaty ally

On February 17, while on its on its way to the small Philippine detachment at Commodore Reef, the Conrado Yap established radar contact with a PLAN corvette with bow number 514.

The Conrado Yap visually observed that the PLAN ship’s gun control director was pointed at it. The gun control director is a mechanical or electronic device that continuously calculates trigonometric firing solutions used to designate and to track potential targets and transmits targeting data to direct the weapon firing crew.

The Conrado Yap issued a radio warning and instructed the Chinese vessel to proceed to its destination. The PLAN ship responded: “Chinese government has imputable sovereignty over the South China Sea, its islands and its adjacent waters.” The Conrado Yap again challenged the Chinese warship and instructed it to proceed directly to its destination. The PLAN vessel repeated its response and maintained its course and speed.

After the incident, both warships reportedly continued their respective voyages.
Crew on the Conrado Yap, relying on visual observation, claimed that the Chinese ship’s gun-firing mechanism was aimed at them. WESCOM, however, admitted that the Conrado Yap is not equipped with the electronic support measures necessary to confirm whether the PLAN ship’s gun control director was actually aimed at her or not. If the PLAN’s corvette’ gun control director was indeed pointed at the Conrado Yap, then it would be the first confirmed time that the Chinese military has directly threatened a Philippine government vessel in the South China Sea.

The WESCOM commander described the PLAN’s action as hostile and an encroachment on the Philippines’ exclusive economic zone. A noted Manila-based defense analyst observed that the incident was unacceptable in common military practice because “it is a hostile act that can lead to miscalculation, and then to escalation, ultimately, conflict.” WESCOM reported the incident to the AFP General Headquarters in Manila, but the AFP and Department of National Defense kept a lid on it until the DFA filed its diplomatic protest.

If an armed clash erupts between the PLA and the AFP in the South China Sea, the Duterte administration will likely be put in the awkward diplomatic position of seeking assistance from the United States, an ally it has been rebuffing for the last few years

Implications for the Mutual Defense Treaty

Since he assumed office in mid-2016, President Rodrigo Duterte has pursued an appeasement policy toward China. This policy has involved efforts to foster closer diplomatic and economic relations with China, accompanied by calculated moves to strategically distance the Philippines from the United States, the country’s only treaty ally. The Duterte administration expected that this appeasement policy toward China would yield two dividends: economic largesse and moderation in the South China Sea.

Despite discussion of joint cooperation and a code of conduct in the South China Sea, Beijing maintains that the issue of sovereignty is nonnegotiable and it will use force to uphold its claims if necessary. The February 17 stand-off showed that no amount of diplomatic concessions from the Philippines would prevent China from pursuing its goal of maritime expansion in the South China Sea at the expense of the other claimant states. If an armed clash erupts between the PLA and the AFP in the South China Sea, the Duterte administration will likely be put in the awkward diplomatic position of seeking assistance from the United States, an ally it has been rebuffing for the last few years.

In February, President Duterte informed the U.S. government of his decision to terminate the 1999 Philippine-U.S. Visiting Forces Agreement despite the reservations of his foreign and defense secretaries, and opposition from the majority of the Philippine Senate. He also implied that he wants to eventually abrogate the 1951 Mutual Defense Treaty (MDT) and the 2014 Enhanced Defense Cooperation Agreement.

Since 2019, the Trump Administration has indicated to the Philippines that the United States intends to honor its treaty obligation under the MDT.

Pompeo’s comment hinted that the United States would assist its ally in light of Chinese militarization in the South China Sea.

Pompeo’s statement on the MDT indicates a new willingness on the part of the United States to come to the assistance of its ally. However, it also raises the issue of whether or not it would be politically sensible for the Trump administration to put American troops in harm’s way and risk a major conflict with China for an ally that has taken the steps the Philippines has under Duterte. Over the last four years, Manila has shown its eagerness to cut a deal with China, publicly announced that it would be neutral if there were armed conflict between the United States and China, and unilaterally abrogated an agreement that enables American forces to operate on Philippine territory.

The February 17 PN-PLAN incident should be a wake-up call for the Philippines and the United States to determine whether or not the MDT still serves their interests and to decide if it should be maintained, strengthened, or, as Duterte wants, abrogated.