Why We are Afraid 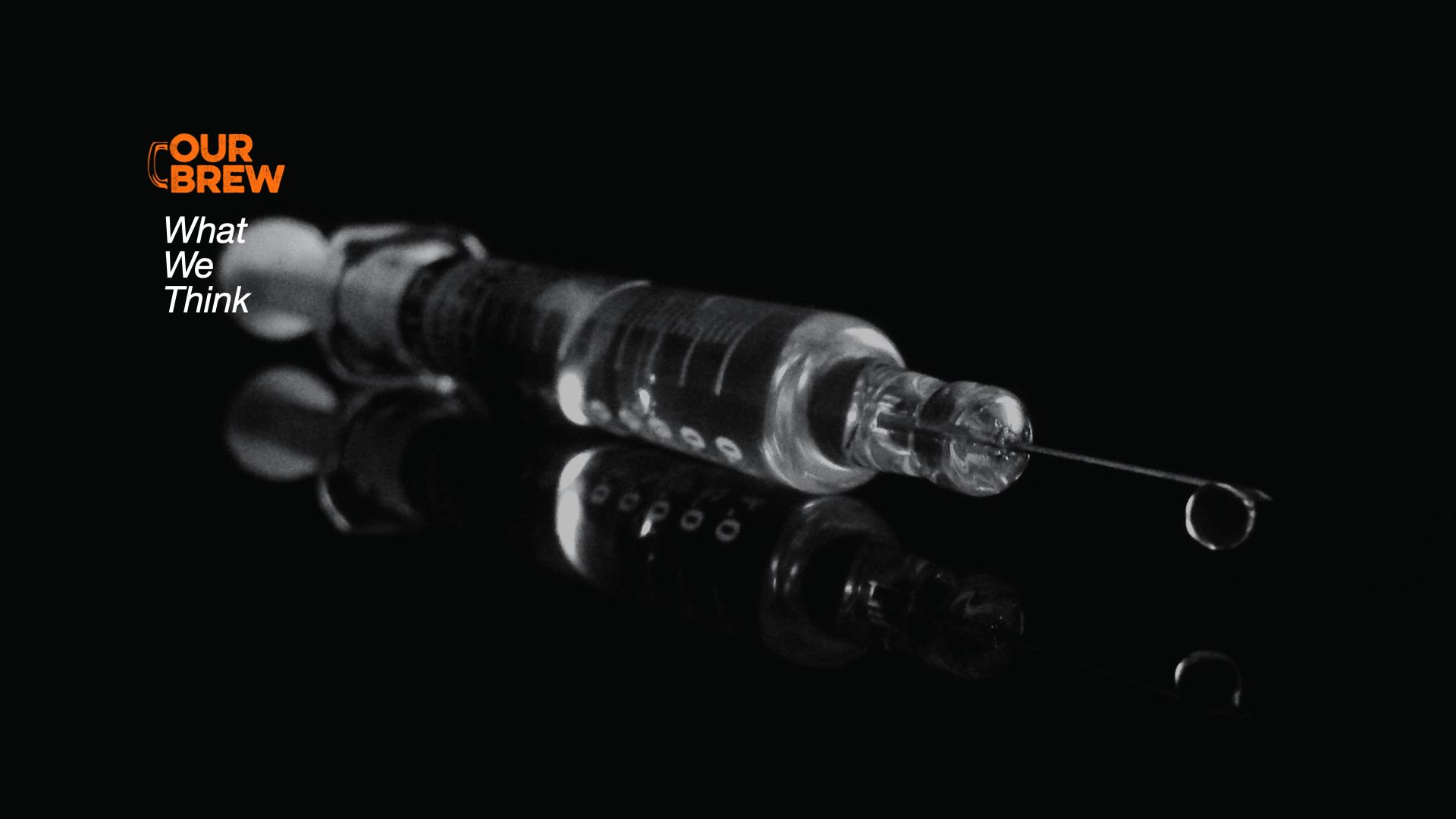 The recent Social Weather Stations survey found that only 32% of adult Filipinos are willing to be vaccinated against the Covid-19. If we compare it with last year's, we see an increase among the hesitant.

Pulse Asia's revealed that at survey time, only 16% were willing to jut out their arms for jabs.

Throw into the cauldron a few other factors: one, doubts whether government "thoroughly evaluated the vaccines to be used" (only 51% of adult Filipinos are confident of the government’s evaluation); and, two, bias for US brands, which could be expected in a people long immersed in the propaganda about American superiority.

And then there's the imbroglio that is Dengvaxia, that odd vaccine that does not protect the healthy, only the previously afflicted ("The analysis confirmed that Dengvaxia provides persistent protective benefit against dengue fever in those who had prior infection. For those not previously infected by dengue virus, however, the analysis found that in the longer term, more cases of severe disease could occur following vaccination upon a subsequent dengue infection." Sanofi).

"Even though the deaths of only three children were found to have been linked to DengVaxia, according to Dr. Madeline Ong, a researcher at Ateneo School of Medicine and Public Health, public confidence was crushed. Surveys following the controversy found that the Philippines’ confidence in vaccines tanked from 93% in 2015 to 32% in 2018... Dr. Joshua San Pedro, with the Manila-based nonprofit Coalition for People’s Right to Health, (which earlier this year gave the Philippine government’s response to the pandemic an “F,”) said he’d prefer to say the country is traumatized, rather than hesitant." Ashley Westerman in The World)

All these factors make vaccine hesitancy in the Philippines a creature different from whatever gallop in other countries.

"Vaccine hesitancy is mostly a problem of the developed world", wrote Dr Daniel Allington, Senior Lecturer at King’s College London, in Counterhate, the Center for Countering Digital Hate, an international NGO that seeks to disrupt the architecture of online hate and misinformation.

"Mostly". We are the country that demands that the statement be qualified, demands to be included amongst the hesitant big guys.

The shepherd blaming the herd

Recently I heard government personalities list various laws they could use against the disobedient and the reluctant amongst the citizenry. Leaders whose management style depends on say-so and authority to get things done are laying the blame at the feet of a people fearful of the vaccine.

Being a marketing man, I wince every time the 'customer' is blamed. You hear  it said often: "Iresponsable ang Pilipino" ("the Filipino is irresponsible"), "pabaya", ("reckless"), "walang disiplina" ("undisciplined"). If the customer buys a brand other than what I am promoting, he is not wrong -- I am at fault. My campaign isn't strategically sound, or the crafting is not powerful enough, or the advertising budget isn't sufficient.

If the citizen does not oblige, if he does not obey pleas for cooperation, if I were government, then I have done poorly in convincing my target audience.

Where is the battlefield?

Now there are problems that live in the mind. Many of the challenges of government are really battles in the mind.

While we cannot fix poverty overnight, we can fix the perception of poverty, and this makes governance easier, less buffeted by the anger that wafts from a hungry people. (It could be argued that half a millennium of chapel, of propagating a catechism of Bahala Na, Ipagsadiyos mo na lang ('leave it to God'), has, in fact, managed to do that, and rather well).

If you want to extinguish bigotry, you cannot legislate it or bark it out of existence; if you want to promote the concept of human rights in a country where the concept, and the term itself, is undermined and contaminated by partisan politics; if you want the drug addict, the drug courier, and the criminal to be regarded as deserving of care and protection from all the pillars of the justice system, and from the citizenry itself; if you want to encourage breastfeeding; if we want Filipinos to love OPM again, or even to sing the national anthem correctly, you work to change minds.

Banning, controlling, restricting by law is a strategy that is difficult to maintain. A top-down approach weakens eventually. In Vietnam, Prime Minister Nguyen Xuan Phuc slammed his fist on the table after being told that their initial success in managing the virus was diminished. "Everyone, including health workers, let their guard down. People stopped wearing masks in public," bemoaned Truong Huu Khanh, head of the infectious diseases department at the Nhi Dong I Hospital in Ho Chi Minh City, in a Reuters article.

Government needs to communicate, implore, beseech, convince, it needs to win buy-in. Without buy-in, you're in the middle of the ocean and dead in the water.

Philip Kotler, a major god in the pantheon of gods in management, marketing and change, author of the 4Ps of marketing, wrote, “buy-in is critical. Unless you win support for your ideas, big ideas never seem to take hold or have the impact you want.”

Without buy-in, without people according the idea a nod, however begrudgingly, the work will be difficult; without sympathy, the vision will be beyond reach.

Get on the soapbox again, raise the voice and the eyebrow, threaten the citizen with the penal code, and you will lose the fight.

"Compulsory vaccination works – but that doesn’t mean that we should resort to such authoritarian measures while viable alternatives remain. In fact, the best approach may be good, old marketing," Dr. Allington maintained.

Respect the power of propaganda.

Advertising made mothers prefer formula over breastfeeding. Advertising got people to love smoking cigarettes. Advertising made the United States a respected and admired empire. Reach for the implement when you want to reverse and repair; use propaganda to upend the bad in society, too.

The battlefield is in the mind, and the mind can be changed, and the changing of minds requires less time. As proof, whenever I teach the subject, I often offer, facetiously, that people have gone from “Hosanna!” to “Crucify Him!” in just days.

But what kind of propaganda?

Heartsell, not hardsell. I return to Dr Daniel Allington and his advice on how to deal with the hesitant: "Don’t get into arguments. There’s probably no point in arguing with anti-vaxxers."

"Above all", Allington continued, "it is important to resist any temptation to respond negatively to the problem of vaccine hesitancy. Vaccine hesitancy is a continuum, and relatively few individuals are inflexibly opposed to all forms of vaccination; it is far more common for people simply to feel unsure".

What is wrong with our vaccine campaign? Why did vaccine hesitancy grow instead of declining?

We must understand that government personalities and agencies have concerns other than effective messaging, which muddies the effort. It is, after all, the "Crazy Season": they need to rate well in the next surveys before they can decide to run for office.

Also, government is trying to convince the head. If you need buy-in, you need to win the heart.

Heidi Larson, a professor of Anthropology, says that "in general, immunization programs are very health-centric, and the Covid-19 response also has too much of the finger-wagging 'science says' or 'your health authority says' and not enough on the broader value of vaccines from the perspective of community and religious leaders, teachers, employers. The tangible value of vaccines in getting us out of this pandemic – and back to school, work, religious, family and social lives – is far more powerful."

Can it be done?

"In 2015, the country showed some of the highest rates of vaccine confidence in the world, and while many countries struggled with anti-vaccination movements, the Filipino’s compliance with childhood vaccinations remained laudable" (Cenon Alfonso, Manuel Dayrit, Ronald Mendoza, and Madeline Ong, 'From Dengvaxia to Sinovac: Vaccine Hesitancy in the Philippines', The Diplomat).

This customer trusted the product before; this sale can be made.