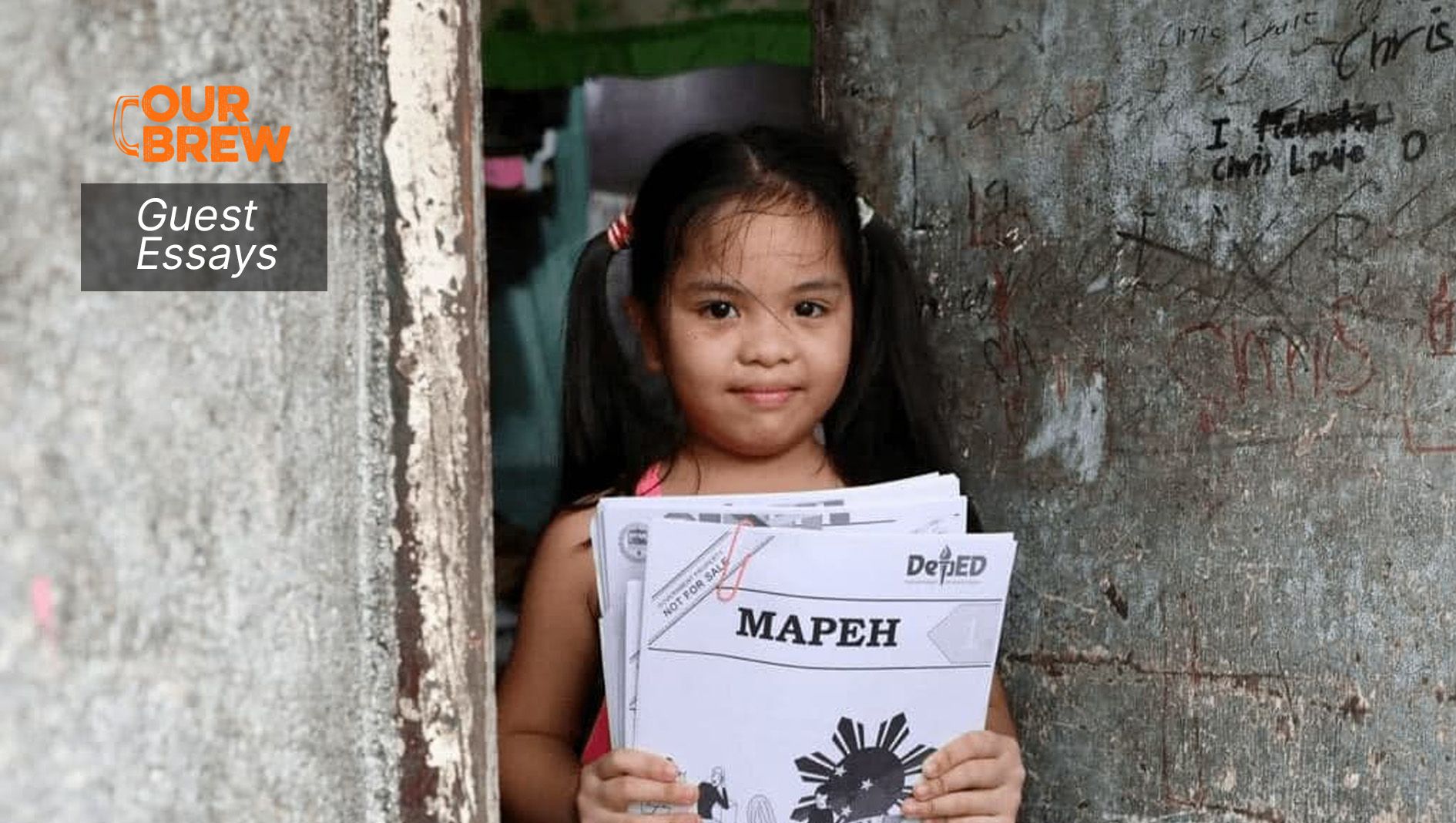 The wise tell us that our only goal for the year is to survive it. Liling Briones was working hard to keep the body that is the educational system alive, a complex body of 989,971 teachers, superintendents, supervisors, heads of schools, regional and central office executives and staff, and 26.7 million learners.

And she did it.

The plan for the school year was not last year's plans put into motion. "Because of the pandemic, we had to retool everything. We reworked and rewrote, and reformulated, and redrew and redesigned modules for cellphones and for laptops, radio, television, and on paper – a total of 2.9 billion self-learning modules mostly hand-delivered to households all over the country", Sec. Briones explained, and in detail. "And we had only about 3 months to do it".

That Liling Briones is in charge of education during this difficult period is a blessing. Any other person would have taken the easy path and postponed schooling until the work was easy and normal, and needed no drastic changes in the curricula and in the modes of teaching.

Our Brew mentioned to Sec. Briones that the public does not know about the mammoth task involved. This series provides the reader a glimpse into what it took to make school year 2020-2021 a victory.

A Long Day's Journey into Light

With apologies to Eugene O'Neill

Writing about the challenges that faced the department during the pandemic,  I realized that there are several untold episodes and stories. So kindly consider this as the first in a series.

Education is one of two issues closest to the heart of the Filipino, the other being health. The Department of Education has consistently garnered very high ratings in surveys for the past four years. At the same time, it is subjected by a few to vicious bashing ranging from name-calling, grumbling, cursing, and fake news. With national elections fast approaching, aspiring candidates will have platforms either praising or damning education.

One critic has stated “numbers don’t lie,” a variation on the popular adage “figures don’t lie.” While in Silliman University, the very first lesson which my Harvard-trained professor in statistics taught his students was, “figures don’t lie, but liars figure. Never forget that!”

I have not forgotten.

The Philippines has undergone many crises for hundreds of years, whether they be political, economic, social, or health-related. We had bouts with cholera epidemics— in 1905 and 1961. In 1918, we had an outbreak of the Spanish Flu, while in 2003, we waged war against SARS. We had to contain the ravages of smallpox.

These health crises took place under volatile political, economic, and social conditions. So it is with our present battle with COVID-19. However, the latter is perhaps the most challenging health crisis the country is faced with. This is because the pandemic is global in scope, and populations are much larger and frequently travel in vast numbers. Above all, the COVID-19 virus had shown itself to be more vicious and resistant to known methods of treatment.

Lockdown, lock up, or lockout?

On March 14, 2020, the government declared a lockdown or community quarantine. This decision was reached after spirited debates among members of the cabinet, local government officials, and offices identified as Inter-Agency Task Force for the Management of Emerging Infectious Diseases (IATF-EID) members.

The IATF-EID was created in 2014 by the previous administration to cope with an outbreak of the Middle East Respiratory Syndrome Coronavirus (MERS-CoV) and the possible threat of other emerging diseases.

During the debates, which lasted ‘til early morning of the next day, my position was that schools should not be closed; that the children were safest in schools where their teachers could monitor them and they were near available health facilities. Most importantly, studies have shown that children are more resistant to COVID-19 than adults but could serve as carriers in their own households.

After one year of studies and loud debates on a global scale, the latest research findings (April 29, 2021) tend to show that while face-to-face classes might increase the likelihood of risk to adults in the children’s households, these risks can be reduced simply by complying with health protocols imposed by health authorities.

With the declaration of a general lockdown, classes were closed just at the time when learners were preparing for their final examinations; and teachers were rushing correction of test papers, computing grades, and planning for graduation. Parents were asking, when is graduation?

When the lockdown was declared, there were more than 9,000 learners, teachers, and staff from all regions were trapped in Northern Luzon. They were there for two national DepEd events: the National Schools Press Conference in Tuguegarao and the National Festival of Talents in Isabela.

Bringing our people home by air, boat, and ground transportation was a complex operation, with the help of local government officials who provided food and supplies, our various regional offices which hosted them, the military who lent their transport facilities and of course, anxious parents and relatives who wanted their children home.

The arduous travel of the DepEd multitude from the northernmost point of the country to its southernmost tip exacted its toll on a few children who caught chickenpox and had to be isolated. Some travelers had to move back and forth from one province to another due to differences in entry and exit regulations. When a group of students finally reached home, they were not allowed to enter their home province because they passed by “infected” provinces during their long exodus.

The story of that successful “exodus” needs to be told separately.

In the meantime, I attended IATF and cabinet meetings, held press conferences, and fulfilled speaking engagements to inform the public of what was happening in the Department.

The Executive Committee and I, plus the Management Committee, met practically on a daily basis to oversee organizational and administrative arrangements.

We have three simultaneous deliverables—first, continue regular operations—signing papers, paying our people, maintaining our facilities and keeping track of developments all over the country; second, review, assess and document attainment of the ten-point program formulated at the start of the my stewardship; and finally, deal with all administrative nightmares triggered by COVID-19.

We had to juggle all three deliverables even as we had to deal with grumbling, cursing, and name-calling aimed directly at me. We had to work also with a skeleton staff. The only way to achieve all of the above was to work twenty-four hours a day, seven days a week. My direct services staff of 15 people had to stay in a facility, cook their food, eat, sleep, do their laundry even as they gathered data, sent communications, and conducted research.

Eventually, we introduced the bubble system.

Staff could alternately go home every two weeks, but before they could return to our bubble office, they had to undergo swabs and careful monitoring by a trained health professional.

I was there all the time.

My staff is composed of young people who are used to going home every day to the loving arms of their families. Several of them are twenty-something years in age. Honor students from the state university and a private university. Truly, the resiliency of the young is amazing! Their capacity for laughter is very infectious. Most importantly, there is that willingness to suffer, to serve, and engage in exciting but demanding tasks away from their families and their worried mothers.

To soothe our souls, we watch concerts, listen to classical music, sigh over great ballets. Hehe, now they can recognize the difference between Rachmaninoff, Tchaikovsky, and Khachaturian. They know who Roberto Bolle, Thiago Soares, Vadim Muntagirov, Svetlana Zakharova, and Marianela Nuñez are.

And yes, they know Filipino pop music! Right now, we are enthused with the theme song of the 2021 National Quincentennial Commemorations in the Philippines, “Bagani.”

Working at the breakneck speed is not all joy and intellectual refreshment. Before the Bubble, several of my direct staff fell ill—one had an emergency appendectomy, and seven tested positive for COVID-19. And when I myself tested positive, 30 staff members who had frequent contact with me had to be isolated. I was separated from my husband and son.

The story of the trials we underwent to come out with our BE-LCP program which resulted in more than 800,000 learning modules deserves a separate story.

The Philippines is on a journey; unlike O’Neill’s dark tragedy, it’s a journey towards the light.

We continue our work. Our battle cry remains the same. It is the same challenge I presented to the U.N. General Assembly: “education must continue! The poor cannot wait!”

The Secretary of Education lackadaisical? C’mon!

Leonor Magtolis Briones served as Vice-President for Administration and Finance of the University of the Philippines System. Before she was made Secretary of the Department of Education in 2016, she was Chair of the Silliman University Board of Trustees, and Regent and Chair-Designate of the Universidad de Manila. She also served as Secretary to the Commission on Audit and served as treasurer of the Philippines.

As a Professor Emeritus of the University of the Philippines-National College of Public Administration and Governance (UP-NCPAG), she has a wealth of experience in the administration of academic institutions and administering public institutions. She is also an articulate advocate on economic and social development issues.

Currently, she is the president of the Manila Concert Choir.